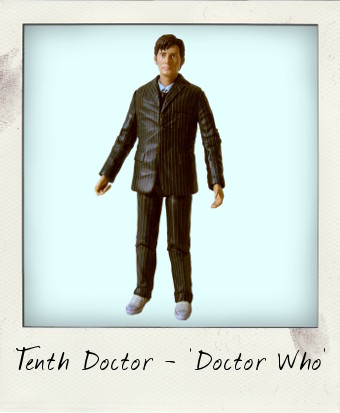 Hot on the heels of Captain Jack Harkness last week, I thought I’d follow that post with a look at another great Character Options action figure from their 5 inch Doctor Who line – none other than the Doctor himself, as played by David Tennant in the tenth incarnation of the BBC TV show’s protagonist. A hugely popular Doctor, Tennant stayed with Doctor Who for three series, as well as appearing in eight specials, before finally handing over the sonic screwdriver to the Eleventh Doctor Matt Smith in 2010. 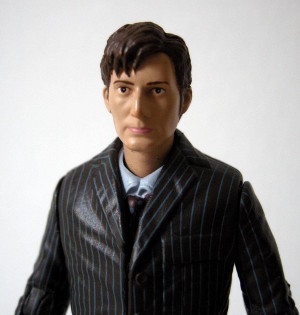 David Tennant IS the Tenth Doctor!

This Tenth Doctor action figure is date stamped 2004, but this brown suited version was actually first released in 2006 as a single carded figure, also appearing as part of several multi-packs featuring K-9, the Daleks, Rose and the Slitheen.

Later versions saw his Converse sneakers change from white to red, and there are also blue pinstriped suited varieties with additional accessories such as the Doctor’s distinctive trench-coat and glasses. This figure was issued with his all important sonic screwdriver accessory and his right hand has been sculpted in slightly bendy plastic to more readily hold it. 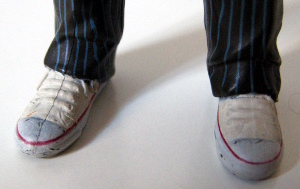 As with the Captain Jack figure, there are multiple points of articulation and the likeness to David Tennant is really very good indeed – he displays beautifully. I love the attention to detail with his clothing too – the pinstripes, buttons and pockets on his suit are all picked out and his trademark Converse are spot on!

A must have figure for any Doctor Who fan! Once again, huge thanks to my sis who sent me this Doctor Who find!