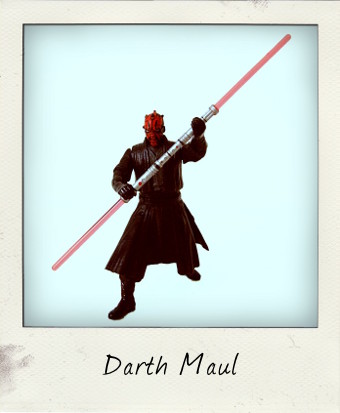 When Star Wars Episode I: The Phantom Menace, the first film in a series of patchy prequels to the original Star Wars trilogy, hit movie theatres in 1999, a global wave of disappointment was felt resulting in a huge backlash against director George Lucas amongst die-hard fans. One character, however, seems to be standing the test of time and in spite of his precious few minutes of screen time, has acquired a cult, uber-villain status – Darth Maul.

Certainly, the climatic fight scene which pits Darth Maul against Obi-Wan Kenobi and Qui-Gon Jinn is one of the high points in The Phantom Menace, and with his long black robes, demonic red face with its black Rorschach-style markings and utterly cool double bladed lightsaber, this is a character born to be transformed into an action figure. Sideshow Collectibles, in fact, have just announced the release of a spectacular Darth Maul Legendary Scale (TM) Figure, proving the enduring popularity of this character.

I don’t own any other modern Star Wars action figures, as my collector’s heart will always belong to Kenner, but when I found this Darth Maul on a market stall going for a few cents the other day, I broke my own rule and succumbed! 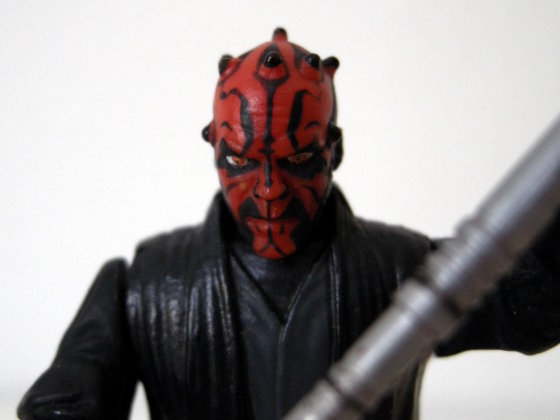 Released in 1999 (date stamped 1998), Hasbro toys really did a fantastic facial paint job with this Deluxe Darth Maul and he looks remarkably like martial artist Ray Park as he appeared in the movie, with yellow eyes, facial markings and horns all present and correct. 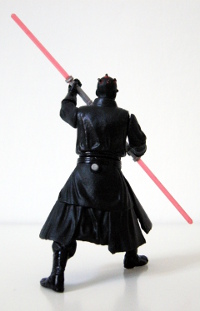 Darth Maul - button on back

There are other very nice touches such as the translucent plastic used to create the effect of an activated lightsaber, and the softer plastic used for his skirt-like robes. Standing at 3 ¾ inches, this figure earned its “Deluxe” epithet thanks to an added accessory – a lightsaber handle into which the figure could be placed, and by pushing a lever, he could be spun left or right, or made to move his arms. This figure is missing the lightsaber handle, but there’s a button on his back which still works, allowing the loose figure to continue to wield his double-ended lightsaber just fine.

The seven points of articulation at the neck, shoulders, hips, with cut joints at the wrists and an extra elbow cut joint at his right elbow, are fairly limited – a bit of movement in the knees would have been nice – but the extra play-factor of the moving lightsaber action more than makes up for this. His pose is dramatic, but if you’re looking to display him properly you’ll either need a proper base or a blob of blue tac on his feet to stop him toppling inelegantly forward thanks to the weight of his saber.

On the whole, however, this is a great looking figure and a keeper!