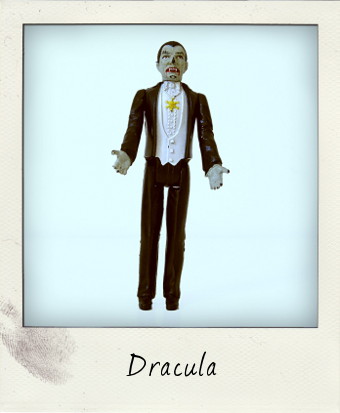 Halloween is almost here so what better way to mark the occasion than with an absolute classic horror film action figure from what has to be one of my favourite vintage lines – the Remco Mini Monsters.

This version of the most famous vampire of them all, Count Dracula as played by Bela Lugosi in the 1931 film Dracula, was issued in 1980 as part of Remco’s 3 ¾ inch action figure series. These figures may have been small, but they really were perfectly formed with all six Universal Monsters – Dracula, the Wolfman, Frankenstein, the Mummy, the Creature from the Black Lagoon and the Phantom of the Opera – bearing extremely accurate movie likenesses. I just love the attention to detail on the blood dripping from his fangs, his menacing eyebrows and Lugosi’s distinctive chin! 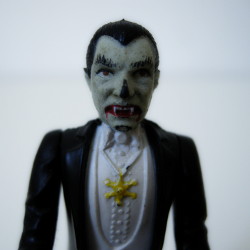 These figures were also reissued in glow-in-the-dark versions to better scare kids after lights out – if you put Dracula here under a light bulb for a few minutes to charge up, he will still glow faintly – very spooky! Unfortunately, as is common with this particular figure, the glow-paint has rubbed off a little on the nose and chin, although this doesn’t detract too much from the figure as a whole.

Dracula has the usual 5 points of articulation in the neck, shoulders and hips, which were pretty standard at the time, and he originally came packaged with a removable red and black vinyl cape accessory, which sadly my figure has lost down the years.

Collect them all … you KNOW you want to!