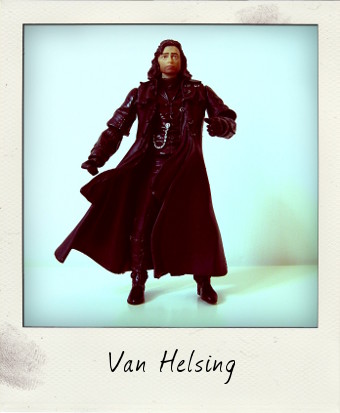 I actually found today’s action figure buried at the bottom of a toy box on a market stall some months ago, but have been waiting for the countdown to Halloween before posting him here. I was pretty pleased to find the companion figure to the Richard Roxburgh as Count Dracula we looked at last Halloween – the vampire’s arch-nemesis himself Gabriel Van Helsing, as played by Hugh Jackman in Stephen Sommers’ steampunk homage to the Universal Horror Monster films from the 1930s and 40s, Van Helsing.

Not everybody loved the movie – certainly not the critics – but I personally found it fun and all three leads – Jackson, Roxburgh and Kate Beckinsale camped it up marvellously! Possibly even better than the movie, however, were the JAKKS Pacific 4 ¾ inch action figure spin-off toys that were released in 2004 as part of the first series in the Monster Slayer line, to coincide with its release (although the figures are actually date stamped 2003). 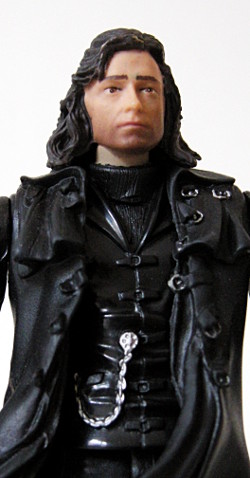 This Van Helsing figure is an excellent likeness of Hugh Jackman as he appeared in the movie and the attention to detail is awesome – check out the rugged 5 o’clock shadow and the molding on the hair. There is also some great detailing on the fastenings of his waist coast and leather trench coat, with the pocket watch and buckles picked out in silver. The coat even feels different and is made in a softer, rubbery plastic. It’s a pity that the figure wasn’t issued with his distinctive oversized fedora aka Monster Hunter hat, although the second wave of figures saw the hat added as part of his accessories. The figure saw some dramatic colour changes in the second wave and playset versions from the simple all-black outfit seen here, with his overcoat and boots changing to brown, whilst his trousers became green.

In this first version he was, of course, issued with his most famous weapon – a working crossbow that replicated the movie version – with a built-in action movement to raise the bow to shoulder height, powered by a discreet button in his back. Whilst my Van Helsing still works perfectly, he raises empty arms because my crossbow accessory is long gone…Lost accessories, aside, however, with an impressive 13 points of articulation packed into a small figure there’s still lots of scope for displaying him in interesting positions. A keeper!