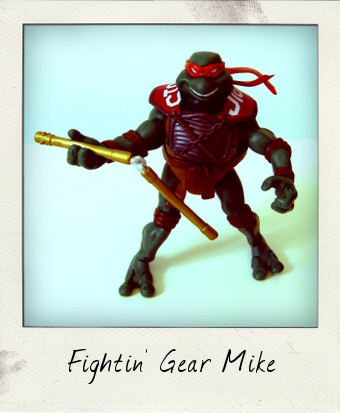 Check out the nunchakus on Mikey! When Teenage Mutant Ninja Turtles reappeared in 2003 in an all new animated TV show Playmates Toys picked up their old license and relaunched their TMNT action figures with series after series of clever and inventive toys. These solidly built 5-inch action figures have great articulation – I love the toes and fingers – and the attention to detail is impressive, as is the thorough array of armour and weapons. Accessories, of course, are easily lost, so I was surprised to find that this Michelangelo still had most of his original gear when I found him on a bargain stall. 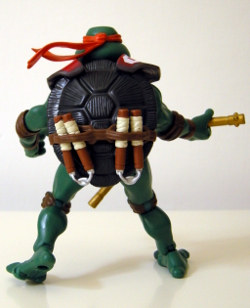 Fightin' Gear Mikey with his nunchakus

This particular figure of the Pizza Dude himself was part of one of the first of the new figure sets released in 2003 – the Fightin’ Gear line. His trademark nunchakus were featured as his primary weapons in the TV series, so he has a pair of standard nunchakus which store beautifully behind him in purpose built slots, as well as a pair of larger “extreme nunchakus”. The chest protector with shoulder pads made from a stop sign is a wonderful feature and is fully detachable. Sadly, my figure is missing his traffic cone shin guard and football helmet, but is nevertheless a great find!

When Donatello told his brothers to go out and find some junk to use as a material for some new armor designs, Mikey really took it to heart! Always one to stand out, Mikey found some old traffic signs and markers to base his fightin’ Gear on. While he might look a little “loud” with his new armor on, don’t let it fool you- those extreme nunchakus will certainly leave a mark on the Shredder!