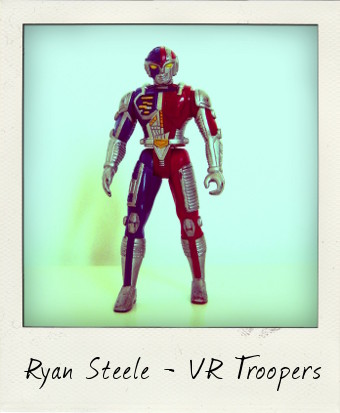 Virtual reality may have been all the rage in the early 1990s, but I confess I was just too darn old to have been into the hit live action TV show VR Troopers when it aired from 1994 – 1996, so I didn’t instantly recognise this vintage Ryan Steele action figure when I found him recently – I just assumed, mistakenly, that he was one of the Power Rangers. This is a forgiveable mistake for the uninitiated, though, given that VR Troopers was very much a sister show to the very similar Mighty Morphin Power Rangers series, with both coming out of the Saban Entertainment stable.

Like Power Rangers, VR Troopers also used a mix of new American footage combined with early CGI and video special effects, cut with fight scenes taken from three Japanese Metal Hero TV series – Superhuman Machine Metalder, Dimensional Warrior Spielban and Space Sheriff Shaider. Such was its dependence on the Japanese fight scenes that the VR Troopers series was cancelled after only two seasons when they had used up all the fight footage available!

With the 1994 5-inch VR Troopers line, Kenner opted for the suited versions of the three teenage heroes – there were no difficulties in making this Ryan Steele look like actor Brad Hawkins in the TV show! Given that Steele was a martial arts expert though, this figure is woefully lacking in points of articulation with only five points – neck, shoulders and legs – although Kenner certainly made up for this in the suit itself, which has a highly detailed sculpt. I love the pose – he displays really well, with his right leg slightly forward giving him a purposeful stance. Ryan Steele was originally issued with the an Edge-Glow “Laser” Blade and Snap-On Pistol, but my figure has sadly left his accessories  in another dimension!