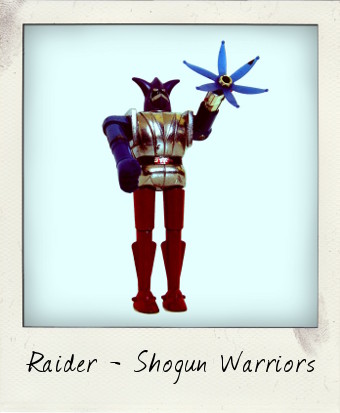 Happy New Year! Here’s a great thrift market find I stumbled upon recently to kick off a new year of action figure blog posts. I don’t usually collect vintage diecast figures, but when this 5-inch Shogun Warrior caught my eye I suddenly understood the popularity of these Japanese robots – the sheer weight of the metal when held in the hand lends a certain authority to the figure which is very appealing.

There were four different Shogun Warriors action figures: Dragun, Mazinga, Poseidon and this one – Raider.

Shogun Warriors were die-cast action figures made mostly of metal, but with some plastic extremities and accessories (his head, detachable right arm, silver firing pin and blue spin star are all plastic). Launched by Mattel in 1979, these figures were in fact, simply re-packaged versions of Japanese chogokin toys that had already taken Japan by storm as spin off toys from manga comic books and anime TV cartoons and were made by Bandai subsidiary Popy Toy. Raider is the Mattel version of Popy’s GA-11 Getter G Liger.

The interchangeable arms with weapons and rocket launcher more than make up for the rather limited articulation – this figure is the second edition with fixed knees, although there is still a little backwards and forwards movement at the hips allowing Raider to shuffle along in a suitably robotic fashion. Colours were also slightly more limited in this version too – his eyes are grey, rather than gold – and there was a reduction in the number of accessories, presumably as a cost cutting measure. Sadly, this figure is missing his missiles, star drill and yellow rocket-wings, but nevertheless this “Invincible Guardian of World Freedom” still looks great on display! This may have been a short-lived line, but it is well-deserving of its continued popularity amongst vintage action figure collectors.