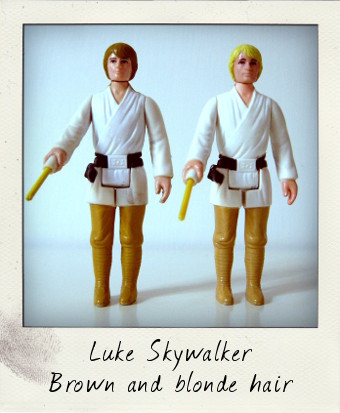 In many ways, vintage action figure collectors have toy giants Kenner to thank for first nurturing the collecting bug in kids when they launched the hugely popular 3 ¾ inch Star Wars action figures and thus set-off a chain reaction of film tie-in merchandising which is thriving even to this day. They also threw in a enough variations in paint work and molds on certain figures, that over thirty years later adult collectors are still kept extremely busy tracking them all down.

Back in 1977, head sculpts were pretty crude compared to today’s standards, but Luke Skywalker does look vaguely like Mark Hamill I suppose, although in the first wave of figures (those that were issued on cards detailing 12 other action figures on the back and known nowadays as “12 back figures”) farm boy Luke looks like he’s taken a bottle of peroxide to his head and sports bright canary yellow hair! At some point along the line, however, a light brown haired, as well as a dark brown haired version appeared, both of which are far more like Mark Hamill’s movie coiffure, although it’s probably the yellow haired Luke that is the most instantly recognisable figure from those years.

My blonde Luke was made in Hong Kong and this information, together with the date 1977 and © G.M.F.G.I. (General Mills Fun Group Inc, a subsidiary of General Mills, a company that had acquired Kenner back in 1967) runs downwards along the back of his left leg over three lines. The paint work is very good and his limbs are still nice and stiff – he even has his original light sabre, although the tip is broken.

My brown haired Luke, on the other hand, seems to have been painted with a limited palette using the same ochre colour for both his hair and his trousers – yellow haired Luke has much paler trousers by comparison. Curiously, his belt is also very dark, even black, rather than the dark, but distinctly brown colour used on blond Luke. There’s no country of original on this one, only © 1977 G.M.F.G.I. written on one line. The sabre on this figure is a mass produced reproduction that has been painted yellow, although for display purposes it does the job nicely!

Kenner would continue to dither over poor Luke’s hair colour in the later 1980 Bespin Fatigues figures from The Empire Strike Back where he has been spotted with even white or orange hair, but by the time he had donned the Jedi Knight Outfit for The Return of the Jedi figures in 1983, Kenner had finally settled on a sickly shade of brown ochre.