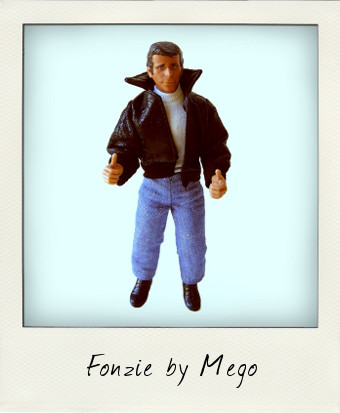 Earlier this year I posted a series of articles taking a close and covetous look at my sister’s childhood collection of vintage Mego 8-inch action figures that we had recently uncovered in our parents’ loft in pristine condition. What a wonderful surprise, therefore, to unwrap my Christmas gift from my sister this year and discover another absolute classic from Mego – a vintage 8-inch Fonzie from their Happy Days line! Aaaaaaaayyyyyyyy!! Is this the coolest action figure ever made? Thanks sis!

Arthur Fonzarelli aka The Fonz was, of course, for anybody too young to remember the show, one of the main characters in Happy Days, a US sitcom that ran from the mid 1970s through the early 1980s, that took a nostalgic look back at the 1950s. The show was a worldwide phenomenon and kids everywhere worshipped Fonzie, the coolest of the cool, who was immortalised forever by actor Henry Winkler with his double thumbs up greeting. There’s even a statue of the Fonz along the river in Milwaukee, Wisconsin, where Happy Days was set and thirty years later the show is still airing here in Italy!

It’s incredible to think that Happy Days had already been televised for three years by the time Mego launched their 8-inch tie-in action figure line in 1977 with Richie, Potsie and Ralph. Three years is a lifetime in today’s cut-throat world of TV shows in which even the slightest slip in ratings will see a series axed in a heartbeat. In fact, those first figures didn’t sell that well. Predictably, the show’s most popular character Fonzie was the toy everybody wanted, and with his unique action thumbs – what else?! – he proved to be a hugely popular figure. The Fonz not only has articulated movement in his thumbs, but also an incredibly cool thumbs up mechanism operated via a lever in his back. 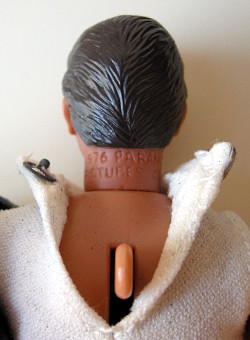 As an added bonus, the head sculpt on this Mego figure actually looks remarkably like Henry Winkler, with great attention to detail – check out his quiff and DA! Incidentally, this is the slightly rarer brown-haired version (there is also a black-haired Fonzie head too).

Another curiosity is that the Mego Fonzie has his own unique body too – apart from the obvious differences with the action mechanism of the upper body torso, he also has a blue plastic pelvis area, rather than the standard tan colour, which makes him look as if he is respectably wearing a pair of underpants! This complete Mego Fonzie includes his detailed leather jacket, a white sleeveless under-shirt with high collar and popper button, blue jeans and black boots.

Every collection should have one! All together now: Sunday, Monday Happy Days…!