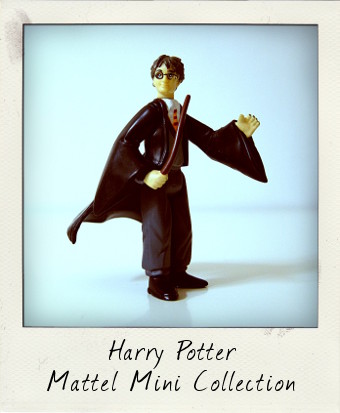 The countdown to the release of Harry Potter and the Deathly Hallows is well under way with Part 1 of the film about to hit cinema screens across the globe in just over a week’s time! Harry is all grown up now in this grand finale, so I thought it might be fun to take a look back at an action figure when Harry was younger, and quite literally, in the case of this figure, much smaller! Small, but nevertheless, perfectly formed with an excellent movie-likeness of Daniel Radcliffe and six points of articulation – not only the standard points at the neck, shoulders and hips, but also a fun extra with a moving flap that allows his wizard’s gown to sweep up behind him and looks great when displayed.

Released as a tie-in action figure with the third movie, based of course, on JK Rowling’s book of the same name, Harry Potter and the Prisoner of Azkaban, this action figure really is tiny, standing at only 2 ½ inches. Harry was joined by Professor Remus Lupin in both his human and Werewolf forms in an action figure three-pack as part of the first series of Mattel Mini Collection Figures released in 2003.

Working on the principle that today’s mass produced toy is a potential vintage action figure collectible of tomorrow, I couldn’t resist grabbing this one when he turned up in a flea market recently!

If you’re looking to track down the other mini figure sets look out for other three-packs with Draco, Harry and Oliver Wood in Quidditch gear; Harry with a Dementor and Sirius Black, as well as our heroes in one set – Harry, Ron and Hermione.