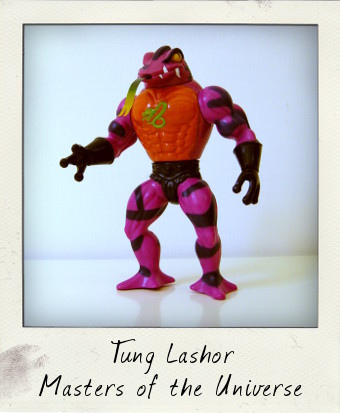 You’ve really got to hand it to Mattel, the creators of He-Man aka Masters of the Universe action figures, in their ability to come up with some of the greatest character names of any toy line ever! There was Moss Man (who was covered with moss – what else?!), the onomatopoeic names Buzz-Off and King Hiss, and of course, those wonderful made up words – Grizzlor, Skeletor and Roboto. This particular 5-inch MOTU action figure from Series 5 in 1986 is called Tung Lashor, probably one of the best of the worst linguistic puns of the series. One of the Snake Men, a race of evil humanoid snakes, he possesses, if you haven’t already guessed, a super long extending tongue, which in this figure is controlled by a dial on his back. Most MOTU figures had some kind of special action feature and this “tongue lashing” action still works really well!  The original Tung Lashor packaging promised that his tongue could give “venomous licks”. Whilst Mattel did actually go so far as to make Stinkor smelly and Grizzlor furry, thankfully they stopped short of poisoning kids and left Tung’s tongue with a simple whipping action!

The Snake Men as a group never actually appeared in the accompanying He-Man series cartoon. Instead, Tung Lashor starred in She-Ra as a member of the Evil Horde, presumably as a way of continuing to promote these newer toys in the absence of the He-Man which had been cancelled and replaced by She-Ra. 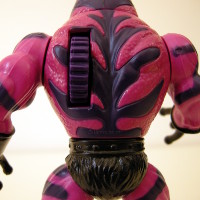 The Masters of the Universe – Original Series figures all follow very similar body types and molds, with a standard figure featuring a muscle-bound torso sitting on a pair of armoured underpants and legs that swivel at the hips! Tung Lashor is a figure that does have its own variants, however. Some versions have no markings on his back, even though the figure looks as if it should have been painted. This figure is a painted back variant.

The figure was issued with two accessories – a dragonfly crossbow and a staff in the form of a snake, but unfortunately my Tung Lashor figure has mislaid his weapons.

With Mattel continuing to release its Masters of the Universe Classics line and adult collectors clamouring to buy them all, it looks like interest in these vintage figures is set to grow and grow!