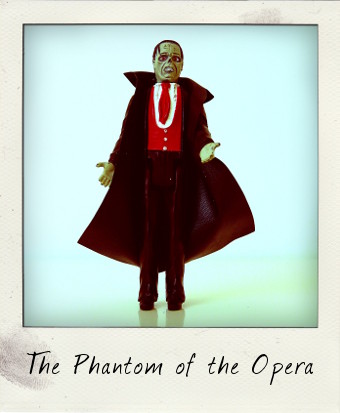 So here it is folks! The final post in our Halloween series for 2010 and one of my favourite horror film action figures and another Universal Monster movie classic – The Phantom of the Opera as played by Lon Chaney. Issued as part of the Mini Monsters line by Remco in 1980, this 3 ¾ inch action figure may be small, but it has one of the single best movie likenesses of all time. It features one of the earliest of the Universal Monsters – so early, in fact, that the 1925 version of The Phantom of the Opera, was a silent horror film. Chaney’s intentionally horrific, self-applied make-up, has been perfectly reproduced in this figure – a flattened nose, flared nostrils and jagged teeth in a mask-like deformed face. It’s an absolute gem of an action figure! 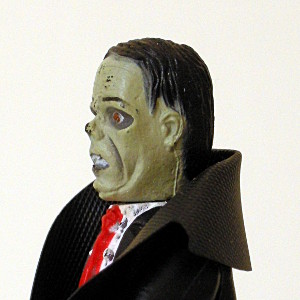 A great likeness of Lon Chaney!

This, incidentally, is the non-glowing edition of this figures – Remco re-released all figures in the series, which also included Dracula, the Wolf Man, Frankenstein, the Mummy and the Creature from the Black Lagoon as glow-in-the-dark versions, to presumably better freak kids out after lights-out! The Phantom has the usual limited 5 points of articulation in the neck, shoulders and hips, but that was standard for the day and the attention to detail more than makes up for the lack of movement. His face has a little paint wear, which seems to be common with these figures, but his stylish black vinyl cape accessory is still intact!