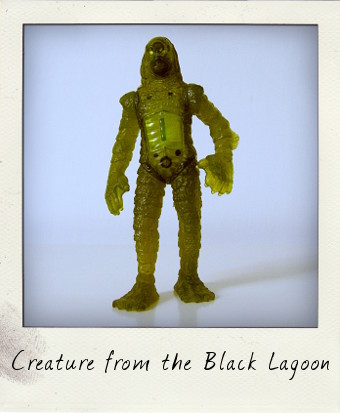 Regular readers to this blog may recall that as a vegetarian and somebody who hasn’t stepped inside a McDonald’s for a couple of decades, I’m not usually a collector of fast food toys…unless, of course, I happen across one at a flea market, as I did with this Creature from the Black Lagoon recently. As a Universal Monsters film fan I couldn’t resist this action figure, which was issued by Burger King in 1997 alongside equally accurate movie-likenesses of Dracula, Frankenstein and the Wolf Man – all my concerns about the influence of these very toys on childhood obesity flew momentarily out of the window! With the standard five points of articulation on each figure and individual action features, the quality of these figures is so high they almost look like they have come from a regular toy line and certainly seem to have been closely inspired by the Remco Mini Monsters from 1980.

Each figure was also issued with an accessory and a new nickname – “Bolts and Volts Frankenstein” had a lab table that made his head light up, “Down for the Count Dracula” a stylish red coffin so he could rise from the dead and “The Wolf Man Cellar Dweller” a somewhat odd wooden crate that presumably afforded the poor chap some privacy whilst transforming into the beast! Only this Creature aka “The Scaly Squirter” figure had his accessory built-in as the fifth point of articulation: if you submerge him in water and then press a button on his belly, he will squirt – or at the very least dribble – water out of his mouth.

The Creature is also made of slightly translucent plastic which lends him a nice luminous green glow depending on the light source around him. The figures were all about four inches tall, but they gave the Creature from the Black Lagoon an extra half inch so he could tower over the others – truly monstrous!

Watch this space for another Halloween-themed very post soon!