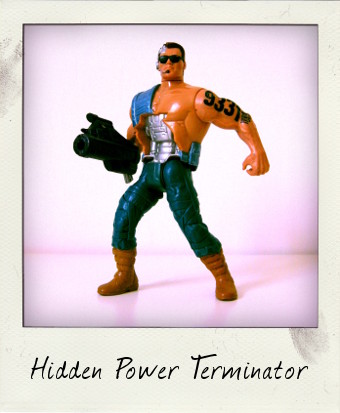 Way before he became the 38th Governor of California and acquired the scary power to actually terminate people in real life, Arnold Schwarzenegger was a humble body-builder turned Hollywood actor, who made some great action movies like Terminator and had the kind of jaw-line, body sculpt and dramatic delivery that made him already seem like a 1:1 scale talking action figure!

In recent years, NECA has issued some awesome T2 action figures for the adult collectibles market, but the 5½-inch vintage line produced by Kenner in 1992 to tie in with the original release of James Cameron’s sequel to the Terminator – Terminator 2: Judgment Day – were also extremely good.
Future War Terminator, 5, 246, -Kromium -Cyber-Grip -Metal-Mash,””

Solidly built, with a great movie likeness and with fun interactive parts and play factor built-in, the figures in their Terminator 2 line were everything one would expect from action figure giants Kenner. This particular figure is the Hidden Power Terminator action figure from the sub-series Future War.

Evil Cyborgs always lose the fight with Hidden Power Terminator because he hides an extra weapon in his chest. In a flash, he whips out a metal-snagging hook… and fires. 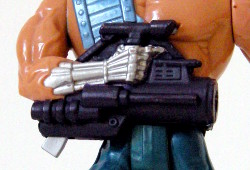 Yes folks, as promised on the card, this one came with Hidden Grappling Hook that Really Fires! Except that my loose figure has lost his grappling hook at some point over the years, although the weapon in his right fist will still snap neatly shut into his chest and spring open when the left arm is moved!

If you want to collect the whole set – and I KNOW you do! – the other figures in the series were the equally excitingly titled 3-Strike Terminator, Battle Ready Terminator, Hot-Blast Terminator, Rapid Repair Terminator and Ultimate Terminator, not to mention a few foes such as Kromium, Cyber-Grip Villian and Metal-Mash Terminator.