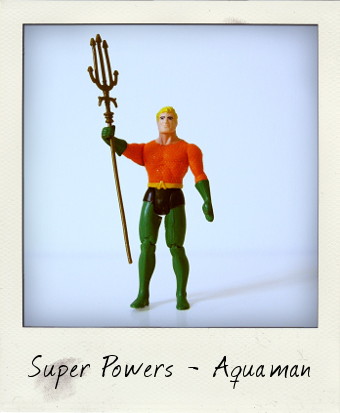 Ever since I picked up a vintage Kenner Super Powers action figure of The Flash last year my flirtation with this line has grown into a full blown love affair, accompanied by an inkling sensation that I’ll surely give in to weakness and end up collecting every figure in the series!

First released in 1984 and enjoying the briefest of runs until 1986, these 4-inch DC Comics superheroes action figures remain some of the best looking sculpts ever – this version of Arthur Curry aka Aquaman, King of the Seven Seas, is a fine example of all that’s great about these figures, with a near perfect Silver Age comic book likeness. The character debuted in More Fun Comics #73 in November 1941, making 2011 Aquaman’s 70th year and giving me another excellent excuse to blog about this figure!

As was the norm with Super Powers figures, Aquaman comes with a built in “super power” action – if you squeeze his arms together he performs a stylish “Deep Sea Kick” – what else? – and in keeping with his watery heritage, he brandishes a golden trident that would do Poseidon proud. My Aquaman is in pristine condition with zero paint wear and his action kick still works brilliantly. Amazingly, he has managed to keep a grip on his trident accessory too over the years, making this a complete loose figure. 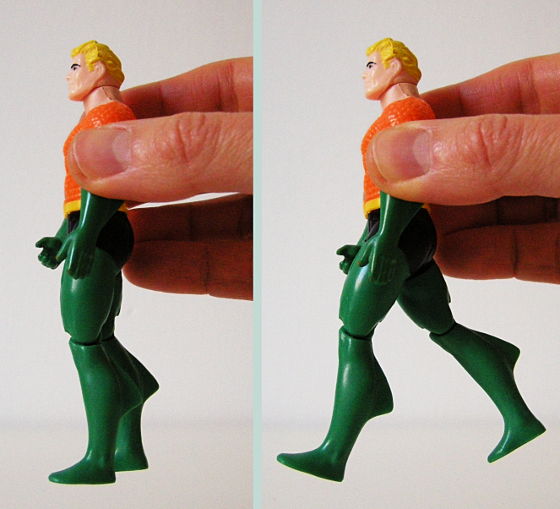 With each Super Powers Collection action figure from the first two series a minicomic was included, although sadly I’m missing this extra which teams Aquaman and the Flash together against the Penguin. (Incidentally Aquaman also appears in the Lex Luthor minicomic too.)

The attention to detail was paramount in this line – check out the scales on his orange torso and the fins on the back of his boots, not to mention the tousled hair and A on his belt – just perfect! So…can you tell I like this figure? He’s a must for any superheroes action figure collector.