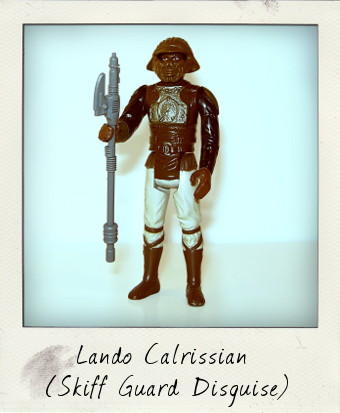 Billy Dee Williams, who played Lando Calrissian in The Empire Strikes Back and The Return of the Jedi in the original Star Wars Trilogy, came away with something which none of the other cast members managed to obtain – a series of action figures that actually looked rather like him! Of all of the Lando figures, this stunner which shows our redeemed hero in his Skiff Guard Disguise, is not only my absolute favourite Lando, but also one of my favourite vintage Kenner Star Wars action figures from the entire line. 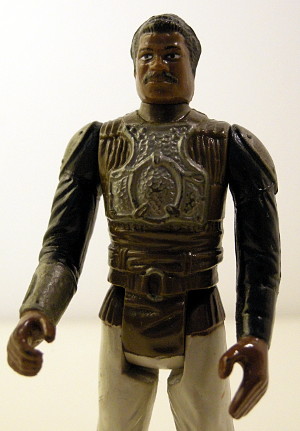 This figure first appeared on a 65 back card in 1983 (although it is dated stamped 1982) to coincide with The Return of the Jedi, and as with many Star Wars action figures, there are a few variations out there with differing permutations of lighter and darker skin tones on the face and hands, combined with a light or dark brown torso and light or dark brown boots. If tracking down those differences is important to you there’s lots of fun to be hand with this figure – for the record, this is a light face, hands, torso and boots version.

Kenner really excelled themselves with this version of Lando Calrissian – the scuplt on the armour breast plate with its beaten iron effect is wonderful, as is the attention to detail on the shoulder plates with individual rivets shown, as well as the pleats and folds on his tunic. I could go on and on…! One of coolest things about this figure, however, is the removable Skiff Guard Helmet which fits snugly on his head – luckily, my Lando is complete with both this original accessory and his Skiff Guard Vibro Axe.

All in all an unbeatable action figure and must-have in any Star Wars collection!