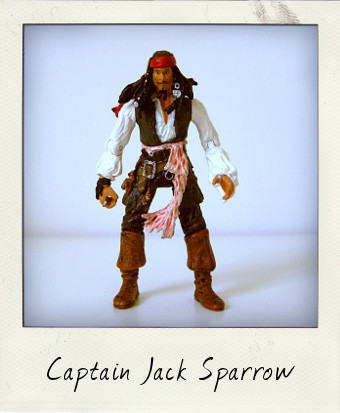 As film producers and toy manufacturers are well aware, you simply can’t keep a good franchise down! With Johnny Depp sharpening his cutlass once more this summer and reprising his role as Captain Jack Sparrow in the fourth Pirates of the Caribbean movie, On Stranger Tides, I thought it might be interesting to take a look at one of the action figures that accompanied the last outing At World’s End. Orlando Bloom and Keira Knightley may have finally jumped ship, but with Ian McShane as Blackbeard and Keith Richards as Captain Teague on board I’m sure the new film will be great fun!

Johnny Depp is astoundingly photogenic, of course, and seemingly also a perfect model for just about any scale action figure you care to mention. The market has been quite literally swamped with Pirates of the Caribbean merchandise since the first movie The Curse of the Black Pearl was launched by Disney in 2003, but it is the Jack Sparrow action figures that have dominated the market.

This Pirates of the Caribbean: At World’s End 3 ¾ inch action figure of Captain Jack Sparrow was issued by a company called Zizzle in March 2007 and is, by all accounts, a highly detailed, movie-accurate sculpt – rings, scarves, buckles and dreadlocks are all rendered perfectly – and with eight points of articulation at the shoulders, elbows, legs, waist and neck, can be posed extremely well for such a small scale figure.

The figure came packaged with a rifle and a removable leather-look coat, but when I dug this one out of a bargain bin on a market stall in Rome the other day these accessories were nowhere to be seen. In fact, Johnny was even missing an arm, but thankfully I managed to track that down after a little rummaging around and could attach it quite easily. Working on the principle that today’s toys are tomorrow’s vintage collectibles I snapped him up right away. A fun find!