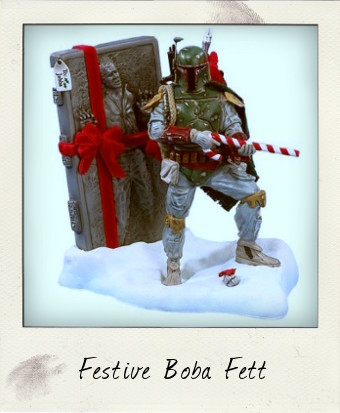 A long time ago in a galaxy far, far away….Chewbacca, with Han Solo along for the ride, is heading back home for Life Day, the Wookie equivalent of Christmas. Don’t remember this from the movies? Believe it or not, this scene was actually filmed! But not for the big screen. The Star Wars Holiday Special was televised at the height of Star Wars mania in 1978. Directed by Steve Binder of the Elvis 68 Comeback Special fame, the Christmas television special took the now legendary characters from the Star Wars universe and combined them with all the Christmas trimmings of an old fashioned television variety show! Sounds great, right? Sadly, the results were deemed so embarrassingly bad that the very existence of the show has become one of the worst kept Star Wars secrets, with George Lucas totally disowning it and going to enormous lengths to prevent fans from ever seeing it again!

This kitsch 1970s classic, however, is proof that Star Wars and Christmas go back a long time! If you’re looking for a holiday gift for the Star Wars geek who has everything, there are a surprising number of Star Wars themed Christmas items out there.

Santa may have ways of finding out who’s been naughty or nice, but bounty hunter Boba Fett took the whole “bag of coal” gift concept to new extremes in The Empire Strikes Back when he sealed Han Solo in “carbonite” (a fictional metal alloy made from carbon) ready for shipping to Jabba the Hutt. This 8 inch Fabric Mache resin Kurt S. Adler masterpiece recreates Han’s capture to wonderful effect. The Boba Fett figurine actually has zero points of articulation and is therefore not an action figure as such, but it’s so utterly cool I couldn’t resist sharing this Star Wars Christmas item here. I love the little details – check out the Christmas label addressed to Jabba… and there’s even a gun gift for Bossk! As weirdly wonderful as the Holiday Special may be, it remains an important event in the history of Star Wars – not only did it feature cameos by all of the film’s major cast, but it also introduced us to Boba Fett for the very first time.