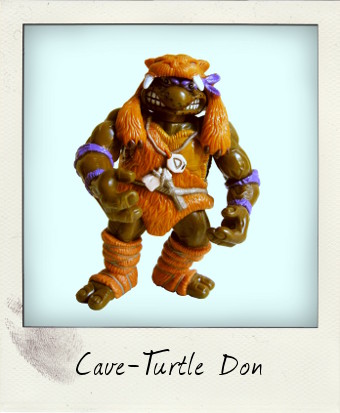 It’s been slow start to 2014 on the vintage action figure collecting front – I’ve come away disappointed and empty handed from several recent forays to markets stalls and my usual haunts. Choice figures from decades past seem to be getting harder and harder to find…But then, unexpectedly, I found a couple of gems at a new flea market this week. I never pass up the chance to add a new Teenage Mutant Ninja Turtles figure to my collection, however silly the guise, so this Donatello draped in furs caught my eye right away!

Issued in 1993 as part of the Cave-Turtles wave – yep, that’s right folks, we’re looking at Stone Age Ninja Turtles – Don was released as part of a boxed set with a “Trippy Tyrannosaurus” accessory, complete with turtle-textured saddle and reins, and wearing a matching purple bandana. What a pity my Don has been separated from his Dinosaur steed! His brothers, incidentally, were also issued with their own prehistoric creature – Ralph with a “Tubular Pterodactyl”, Mike with a “Silly Stegosaurus”, and Leo with a “Dingy Dino”. The figures must have been reasonably popular back in the day because Playmates Toys recycled the Cave-Turtle concept again in 2006 during the early days of the reboot phase of the franchise. 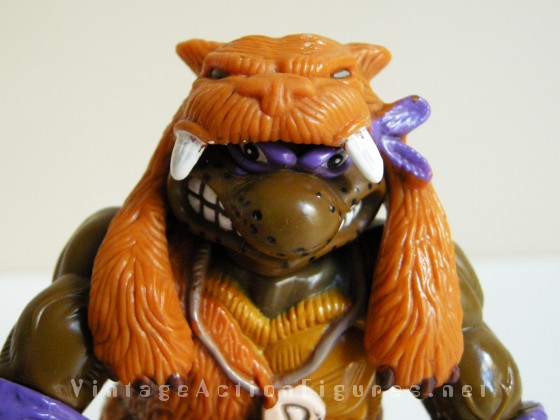 As always with these wonderful 1990s TMNT action figures, this 4 ½ inch Turtle is solidly built from heavy, durable plastic and is full of inventive, well-crafted details. I just love the sabre-toothed tiger skin on his head, classic cave-man animal hide across his shell, and lacing on his animal skin boots. There’s also a great variety of textures on the figure, all rendered through the detailed molding – the fur really does look furry, and contrasts with the geometric patterns on the turtle-shell, whilst Don’s limbs are all bulging muscles and veins, and cast in his characteristic olive green. 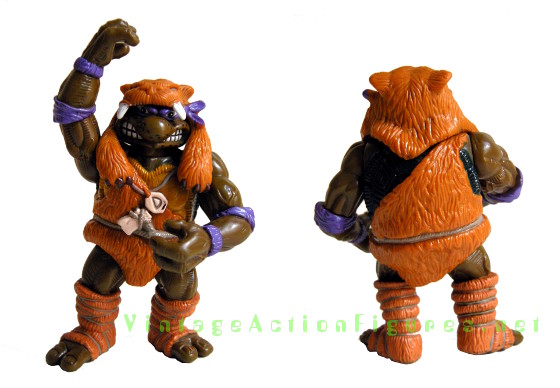 There are just seven points of articulation, and these are pretty limited: his head will turn right round, although hampered by his head-dress; there are cut joints at the shoulders and elbows, which allow for 360° turns; and there are ball joints at the hips giving just enough movement to pose him. And pose very nicely he does too! Look out for his “Battlin’ Bronto Bo” and “Mesozoic Mace” weapon accessories if you plan on adding this figure to your own collection.