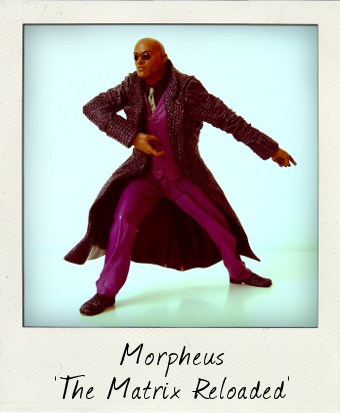 Nobody could argue that Sideshow Collectibles haven’t raised the bar in recent years as far as action figures created exclusively for the adult collectors’ market goes, with their staggeringly good movie likenesses and attention to detail.

In today’s economic climate, however, there’s still plenty of room for companies such as McFarlane, who also manage to render celebrity sports stars’ or actors’  likenesses brilliantly, but at a more affordable price for the average collector. In creating action figures that often have limited articulation, their “action” figures sometimes border on the edge of being considered display figurines, but there’s no arguing with the beauty of a figure such as this version of Laurence Fishburne as he appeared as Morpheus in the The Wachowski Brothers’ 2003 sequel to the hugely influential The Matrix – The Matrix Reloaded.

Based on the Parking Garage Scene when Morpheus and Trinity take on those scary ghost Twins, this 6 inch figure was issued as part of McFarlane Toy’s The Matrix Series 1, alongside Neo, Trinity and the aforementioned twins, with the presentation bases of Morpheous and Twins 1 and 2 connecting together to create a fight scene panorama. 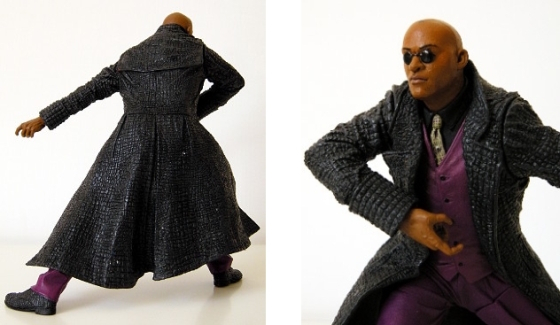 This was actually a spectacularly good thrift store find on a market stall and my Morpheus was loose at the bottom of a cardboard box, so he has sadly lost his four guns and two swords. He will move a little – there are cut joints at the top of his thighs and at the shoulders and his head also turns – but ideally he needs some replacement weapon accessories in order for his limited pose to really make sense. I can see that my vintage Leonardo from the Teenage Mutant Ninja Turtles may be lending him a sword or two quite soon!

Lost accessories aside, however, the attention to detail on this figure – check out the different textures on his coat and suit, not to mention just how much he looks like Mr.Fishburne – make him an absolute keeper!