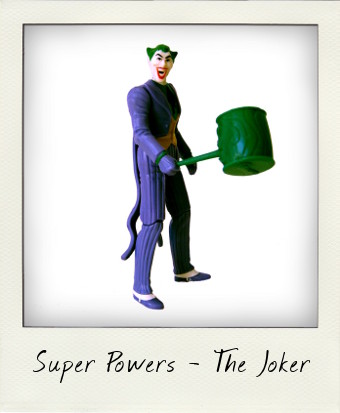 After last week’s look at Morpheus from The Matrix, here’s another iconic figure who looks awesome in a purple suit – Batman’s arch-nemesis himself, The Joker!

Released as part of the first wave of Kenner’s 4-inch Super Powers line from 1984, this is one of the finest renditions of the “Clown Prince of Crime” ever made, which brilliantly captures the maniacal expression of the villain from the original Silver Age DC Comics universe. This groundbreaking Kenner line remains a firm favourite with collectors to this day and it isn’t hard to see why with such excellent attention to detail – from the mustard waistcoat, green shirt cuffs, molded pin stripe in his suit, down to his spats, this Joker is spot on from head to toe!

As with all the other figures in the Super Powers Collection, this action figure, as well as having seven points of articulation at the neck, shoulders, hips and knees, also comes with a built in “super power” action motion. If you squeeze The Joker’s legs together his right arm will move up and down allowing him to hammer away with his special ‘Power Action Mapcap Mallet‘ accessory. Built to last, this Joker’s power action is till working perfectly all these years later.

The mallet itself is actually a caricature of the Joker’s face – his nose forms the handle and it also doubles up as a mask. With each Super Powers Collection action figure from the first two series a minicomic was included, although sadly I’m missing this extra which sees The Joker robbing a bank and escaping in his Jokermobile with Batman’s Batmobile in hot pursuit.