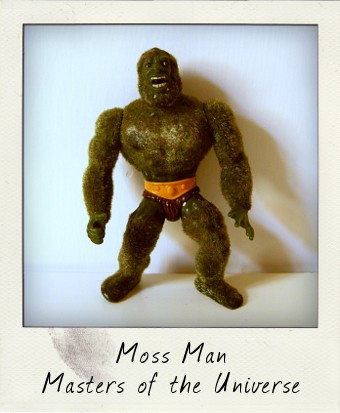 The Internet is fairly buzzing this spring with news of the latest Mattel release in the Masters of the Universe Classics toy line – Moss Man. So here’s a timely look back at the vintage version of that figure…

If there were a prize for the most bizarre action figure attribute then surely whoever thought up Moss Man’s gimmick for Mattel with their 1985 Masters of the Universe 5 inch figure would win hands down! As if the the furry coating over what was essentially a green repaint of the earlier Beast Man wasn’t strange enough, Mattel thought that adding a pine scent to the figure would be just the right finishing touch. Yes, that’s right, along with the physical accessory of a brown mace (again a recast of an earlier item, this time a weapon from the Castle Grayskull playset) this figure also came with a SMELL. Needless to say, the Moss Man I found in a junk store the other day has lost that Magic-Tree freshness and also, sadly, his mace, although his mossy covering is still pretty much intact!

This is the solid head variety – there is also a soft, squeezable head version. His upper body points of articulation are still nice and stiff, whilst he’s somewhat wobbly on his legs which are clearly held together with rubber bands. The original advertising invited kids to Twist his waist and work his powerful arms! In fact, his waist will turn nearly 180° and on release sends his torso into a fast swivel for a couple of seconds. The figure appears to have been made in Malaysia – there’s a COO and copyright stamp on his back just above his fetching yellow belt, but most of it is obscured by the fuzz.