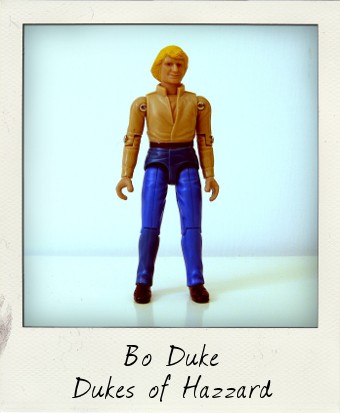 I know it’s April Fools’ Day and I’m sure that this action figure was never intended to be a joke even though many young fans of The Dukes of Hazzard must surely have looked at it and said: You’re kidding…right?! For as much as I love this 3 ¾ inch Bo Duke action figure produced by Mego in 1981, there is no way I can find even a passing resemblance to the actor John Schneider who played Bo in the TV series!

Physical likeness to Schneider apart, however, these Mego figures were actually pretty good with a massive 10 points of articulation packed into what is effectively a tiny figure – the neck, shoulders, elbows, waist, hips, and knees all move, with everything held together with internal rubber-bands. In fact, the figure is not too dissimilar to Hasbro’s later G.I. Joe figures in that respect. Two versions of the head sculpt exist – I’m pretty sure this is a version 2 type, identifiable by the even bigger wave in that canary yellow hair! His torso was never his own, but was instead actually recycled from the Black Hole figures Pizer and Holland, which explains the rather curious and modern wrap-around shirt design. Whilst Bo was mostly sold without any accessories he did appear with cousin Luke as an extra in packs with their car The General Lee.

The popularity of the TV show guaranteed that these action figures sold well, but sadly they are some of the last toys to have been produced by toy giant Mego which would close shop for good in 1983.