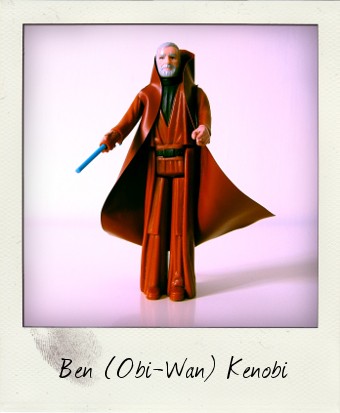 Back in 1977, the only Obi-Wan Kenobi anybody had ever heard of was played by veteran British actor Alec Guinness in the original Star Wars movie. Ewan McGregor, on the other hand, who would slip on Obi-Wan’s cloak in the prequels, must have been just about old enough to play with the Kenner action figures which belatedly appeared  in 1978, but was probably still too small to have seen the movie at the time!

Ben (Obi-Wan) Kenobi was one of the original so called “12-back” Star Wars 3 3/4″ action figures, meaning that he appeared in the first 12 figures range which were featured on the reverse of the original action figure blister packs. The very first Kenobi figures were issued with the now incredibly rare two piece double telescoping lightsaber. This was quickly replaced by the single one piece telescoping blue lightsaber (as seen as the accessory on this figure). The double telescoping lightsabers were considered too delicate and likely to break, and indeed even on the simpler versions the very tip of the lightsaber often snapped off (as can be seen here). Luckily there was a small plastic tab which allowed the saber to slide up inside the arm and out again even if its tip was missing.

Like many of these original figures there are variations of a greater or lesser extent which inevitably fuel the passion of collectors today! Ben (Obi-Wan) Kenobi was available in two distinct versions – grey-haired and white-haired – although there are also further variations within these two groups, with some figures having a markedly wider stance, or different coloured eyes. This figure is a normal stance, grey-haired Obi-Wan Kenobi with black eyes. I’ve positioned his cape at a jaunty angle so you can get a better look at his robes – I just love the 1970s flared trousers on this one!

This figure is date-stamped 1977 and also includes the country of origin (Hong Kong in this case) and © G.M.F.G.I. (General Mills Fun Group Inc, a subsidiary of General Mills, a Kenner owned company), with the lettering going down the back of the right leg on two lines. The figure is in pretty good overall shape with only a little paint wear to the hands and small tear on the shoulder of the vintage vinyl cape.