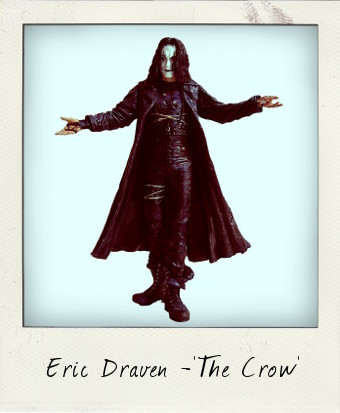 With Halloween very nearly upon us I thought this would be an excellent moment to showcase this recent flea market find. Admittedly it will be quite a few years before this 2005 NECA figure celebrating The Crow movie character Eric Draven can properly be described as “vintage”, but he is such a stunning figure I couldn’t resist adding him to my collection.

The tragic and untimely death of Brandon Lee in an on-set firearms accident during filming of the final scenes of the 1994-released movie has undoubtedly added to the “cult” status of The Crow, but watched with a purely objective eye twenty years on, the film really has stood the test of time and Lee’s central performance  is particularly deserving of critical praise. This 7 inch action figure beautifully captures Lee’s likeness and mesmerising expression and is a wonderful piece of memorabilia. 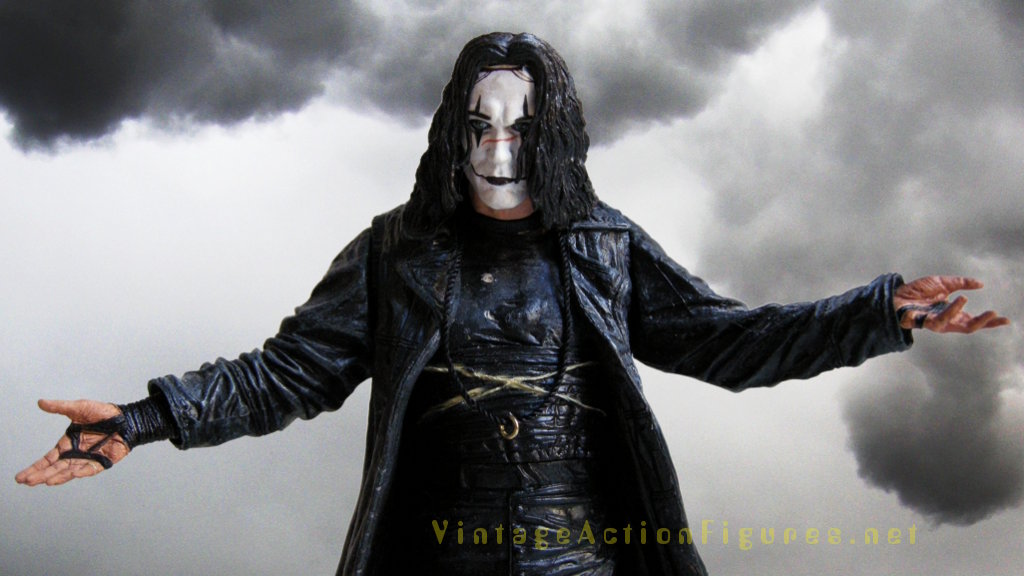 It can’t rain all the time

Issued by NECA together with Reel Toys as part of Series 1 of movie “Cult Classics” characters, which also included Patrick Bateman from American Psycho, Jason from Friday the 13th: Part VII The New Blood, and Mohawk from Gremlins 2 :The New Batch, this Eric Draven figure was originally packaged with some themed accessories – a tombstone and graveyard stand, and of course, the crow. Sadly, this loose figure has inevitably lost those extras. There is a small hole in his shoulder where the crow should sit – I hope to find a replacement part eventually. His pose is so striking, however, that it’s easy to forget that the figure isn’t complete. Amazingly, he does still have a tiny, gold ring accessory on a piece of string around his neck, a wonderful detail, albeit at odds with the fact that the figure is already wearing said ring on the little finger of his right hand, a reference to the scene in the movie when Draven retrieves Shelly’s engagement ring from Gideon’s pawnshop and places it on his own finger. 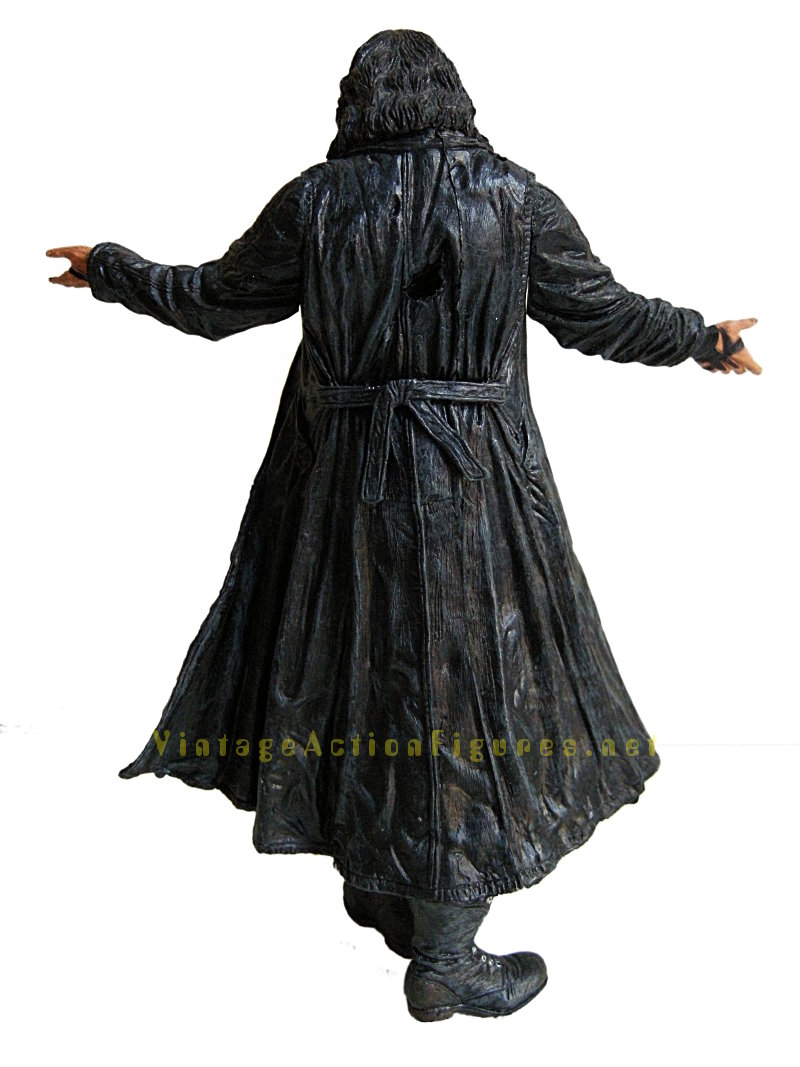 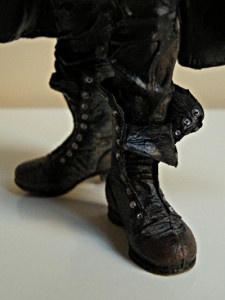 The devil is in the detail

The attention to detail across this whole figure is breathtaking. His coat is modelled in a softer, flexible plastic, with every fold, crease, stitch and belt perfectly reproduced. Rarely does the back of an action figure deserve as much attention as the front, but with this figure it’s hard not to keep turning it around and around to admire the details, even down to the somewhat macabre – given Lee’s cause of death – movie-accurate bullet holes in his back. The hair is likewise sculpted in a flexible plastic, with individual strands falling across his face. As far as the facial sculpt goes, this is as good as it gets, with wonderful work by sculptor Kyle Windrix, with paint applications by Jon Wardell and Geoffrey Trapp that take the perfect sculpt by Windrix to the next level. I love the distinction between the face-paint and neck and those painted irises and pupils that breathe life into this figure, not to mention the picking out of details in his costume such as eyelets on the boots, and even a muddy brown effect on the toecaps. It’s a sterling job all round. 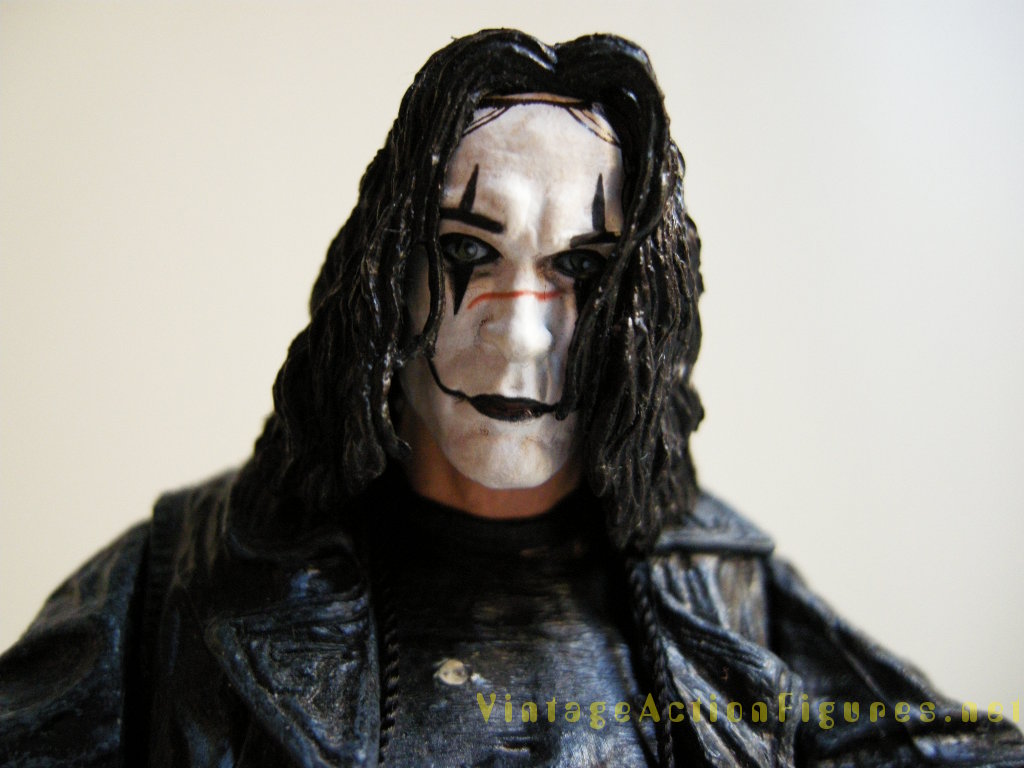 Articulation is as limited as one might expect in this kind of display-only adult collector figure, but for the record there are actually a surprising nine points of articulation at the neck, shoulders, wrists, hips and ankles, allowing for slight variations in pose.

If you’re a fan of The Crow or movie-themed action figures you’ll definitely want to add this to your collection. Happy Halloween!