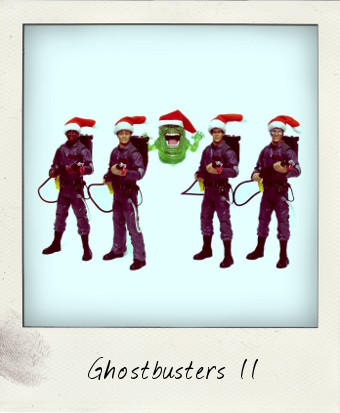 Ghostbusters saw the 30th anniversary of its original release this past year. Sadly, the world also lost Harold Ramis, who played Egon Spengler and was one of the creators of this iconic movie, so this seems like a very good year to remember Ghostbusters at Christmas. In 2010 Toys R Us sold this exclusive set of 6-inch action figures by Mattel, based on a short scene in the sequel Ghostbusters II, where the team ran through the streets of New York wearing Santa hats.

The pack included all four Ghostbusters with excellent likenesses of Ramis (Egon Spengler), Bill Murray (Peter Venkman), Dan Aykroyd (Ray Stanz), and Ernie Hudson (Winston Zeddemore), as well as resident ghost Slimer. All figures came with cool ghostbusting accessories in the form of attached Proton Packs and Neutrino Wands. A must for all Ghostbusters fans!