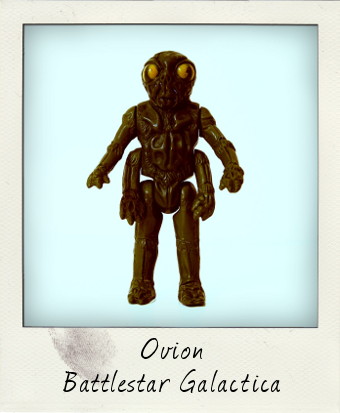 With this 1978 Battlestar Galactica action figure of Ovion, Mattel managed to pack six points of articulation into a 3 ¾ figure. Of course, when the figure in question is an alien bug with four arms and two legs, they clearly had a head start on the articulation front! Sadly, the neck is firmly one piece with the torso, although with all those limbs I’m sure kids at the time had lots of fun with this one.

Ovion appeared as part of the first series of figures, which was launched to tie in with the original 1978 Battlestar Galactica sci-fi TV show and was a clear attempt to ride the tail of Kenner’s success with their Star Wars line. The full set of first wave figures included Cylon Centurian, Imperious Leader, Daggit, Commander Adama, Lt. Starbuck and our Ovion here.

Whilst Daggit and Starbuck, for example, were specific characters from the show, Orion would seem to be a more generic figure to represent the Ovions, an insectoid race of creatures that were in cahoots with the show’s bad guys the Cylon Alliance. The opening episode Saga of a Star World, however, did feature an Ovion called Lotay, who was Queen of the Carillonian Ovions no less. She was assisted by another Ovion named as Seetol. This vintage figure was originally packaged together with a kind of long shawl made of fine netting – rather like that worn by Lotay on screen. Unfortunately, this somewhat flimsy accessory has long been lost with this figure.

On a side note, later in the 1980s the Multi-Toys Corporation would produce a line of figures called “Bugmen of Insecta” packaged on cards with graphics reminiscent of 1950s B-movie posters. Ovion always reminds me of a B-movie alien and I wouldn’t be surprised if he (or she) had inspired that later set.