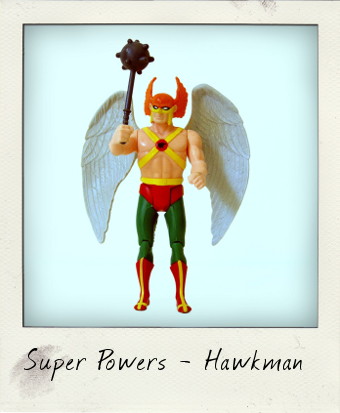 Any regular readers of this blog will know that my big collector’s crush of the moment is on the vintage Kenner action figures known as Super Powers. Produced for a mere two years from 1984 until 1986 when the line folded after only three series, these 4-inch action figures starring DC Comics superheroes with built-in power action features, are still hugely sought after by many toy fans. Let this post serve as a warning – buy just one of these figures and you’ll soon find yourself wanting each and every one of them!

Kenner released this impressive Hawkman figure, for example, in its initial 1984 first wave of Super Powers. Back in the good old days when Hawkman was still known as archeologist Carter Hall, the reincarnation of an ancient Egyptian prince named Khufu, before his back-story got seriously complicated or rather “re-invented”, this is how he looked. Created by Gardner Fox and Dennis Neville, Hawkman first appeared in Flash Comics # 1 in January, 1940 – the sculpt and paint work is a stunning rendition of the Golden Age comic book art work: a winged helmet over a yellow cowl, yellow crossed straps with the Hawkman insignia over a bare six-pack, fetching green tights and flashy red boots. What else…? Oh yes, and a huge pair of feathered wings! (Actually, the Hawkman insignia didn’t appear until he got his own mag in the 1960s – as the alien policeman from Thanagar…but we’ll leave Kenner a little artistic license on that detail!) 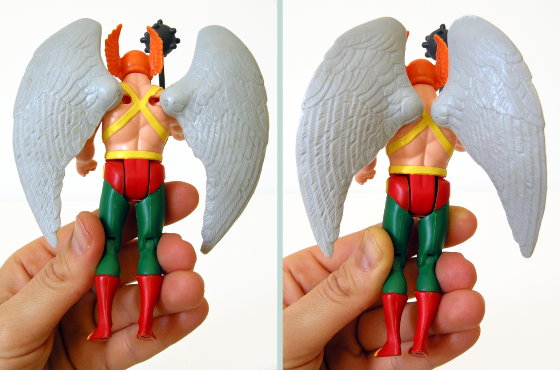 Kenner created Hawkman to scale and he is larger than most of the other figures in the line, measuring 4 ¾ inches from his toes to the tip of his helmet wings and towering over the other figures (which would come in handy later when he was recycled as Little John in the Robin Hood series). He was also issued with a great mace accessory that my loose figure still has. The most exciting feature, however, was without doubt his Power Action Flight Wings – when his legs are squeezed together the wings actually flap. To Kenner’s enormous credit, this solidly constructed figure’s heavy wings still work after 27 years! An awesome find – I love this figure!