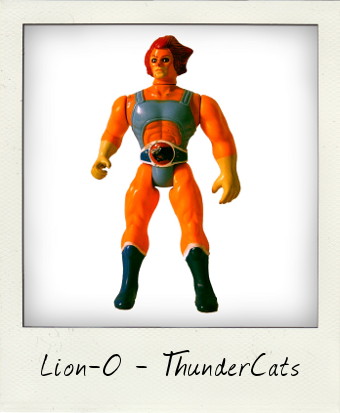 There’s been some very excited blogging throughout the Internet over the last few days ever since the Cartoon Network screened a preview of the all new ThunderCats at WonderCon. Produced by Warner Bros. Animation, the new series is due to hit small screens this summer and will see the old heroes Lion-O, Cheetara, Panthro and Tygra back in re-imagined versions and darker story-lines. What better time, then, to dig out a vintage ThunderCats action figure of Lion-O from the original 1985 TV series that followed the adventures of everyone’s favourite humanoid cats from another planet! 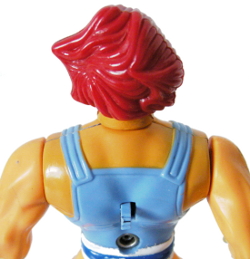 Produced by wrestling action figure giants LJN Toys, the ThunderCats line was arguably the only serious rival to Mattel’s He-Man series and like those Masters of the Universe figures, each ThunderCats figure also had an action feature – Lion-O here, for example, is ready for “Battle-Matic Action” and still swings a powerful right hook if you press a lever on his back. Even more impressive and not to mention just a little bit spooky, Lion-O’s and Mumm-Ra’s eyes would also light up if a special battery-powered “Power Ring”, which came packaged with the figure, was inserted into a small hole in their backs. Sadly, my Lion-O has mislaid both this gimmick as well as his “Sword of Omens” and “Claw Shield” accessories – luckily his chunky belt with the classic ThunderCats logo on the buckle is painted on!

Standing at about 7-inches tall, Lion-O is solidly built and feels heavy in the hand. The legs and arms are molded in wonderful Day-Glo orange plastic, whilst the torso and head have been painted. The articulation is pretty limited with the standard 5 points at the neck, shoulders and hips, but with all the extra fun stuff I doubt any kids at the time were bothered. This, incidentally, is the red haired variant of this figure; whilst an orange hair version exists, this is the most cartoon-accurate likeness. My Lion-O may be incomplete and have seen some serious play by the look of the paint-wear, he is still an excellent thrift store find!