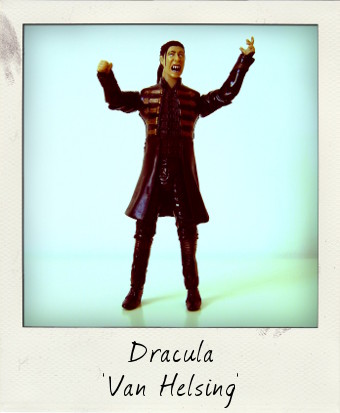 With the month of October now well under way, let’s start the countdown to Halloween with the first post in a series dedicated to monsters and ghouls, with a few slayers thrown in too! Today’s action figure is a fresh lucky find that I picked up only yesterday in a mixed box of random toys on a market stall in Rome. Some years need to elapse before this becomes truly vintage, of course, but it’s such a fun figure that it merits its own review now!

Whilst Stephen Sommers’ 2004 action-movie-meets-horror-film Van Helsing starring Hugh Jackman as Gabriel Van Helsing may have divided critics, I thought it was a highly enjoyable if camp homage to some of my favourite all time movies – the Universal Horror Monster films from the 1930s and 40s. One of the high points of the film is certainly the amazingly versatile Richard Roxburgh’s performance as an extremely dapper Count Dracula.

This Dracula action figure is a pretty good likeness to how Roxburgh appears in the movie when he’s in human form with his fangs bared. The attention to details such as the gold trim on his jacket and boots, the lace-work on his shirt and even his ponytail make this a satisfyingly movie-authentic action figure that should please fans – and there are, surely, SOME fans out there – of the film. With an impressive 12 points of articulation packed into a figure only 4 3/4 inches high, he can also be posed in numerous striking positions. The shoulder articulation is the most curious with ball joints that allow him to spread his arms and look sinisterly double jointed.

Produced by JAKKS Pacific and dated 2003, this action figure actually first appeared in 2004 to coincide with the release of the film. It uses the same model as the Dracula Series 2 figures – he wears his hair down in Series 1 – and was issued as part of a sub-series of Deluxe Figures that had exciting interactive elements and were designed to fit with the Castle Dracula playset, which was sold separately. Without the packaging, however, it’s impossible to be sure if this figure was bought as part of Series 1 (blue labels) or 2 (yellow labels) as the figures themselves seem to have been identical.

This Dracula comes with what was described as a “Blast-Out Coffin” in the first series and as a realistically more sedate “Rising Action Coffin” in the second, which is extremely similar to the one in Van Helsing – if you lay him down for his daily nap, but then press a button at the head of the tomb, he rises, spring-loaded, from the dead exactly as he does in the movie…well, almost! This figure has obviously been popped in and out of his coffin quite bit as the only really noticeable paint wear is to the top of his head where the figure will slightly touch the insides of the coffin if not placed firmly in the purpose built cradle.

Looking at this action figure, however, I can’t help feeling that the big catch with this series may be that the figures are better made than the movie itself…! I LOVE it!