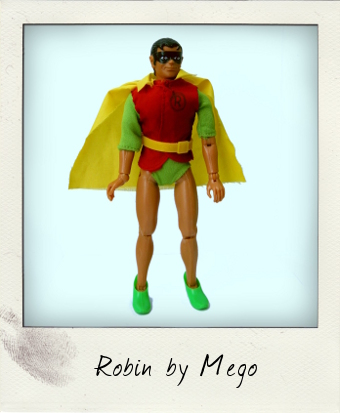 As promised in an earlier post, here’s another vintage Mego 8-inch action figure that was found in a recent loft exploration at my parents’ home. Like Batman, the Lizard and Cornelius, this was another of my sister’s childhood toys, but of all of them, this Fist Fighting Robin probably made me smile the most when I first set eyes on it. Once again, this is a figure in almost perfect condition with only one immediate defect – the original paper logo glued to the left side of his tunic is missing and instead the letter “R” has been carefully drawn in its place! What made me smile was the thought that very probably, as big sister, I was more than likely the guilty culprit who had wielded the felt tip pen all those years ago, although I honestly can’t remember! This figure does still have his luminous green mittens (to match those fetching Robin Hood boots) although at the time of this photo shoot they had not as yet been retrieved from the bottom of the biscuit tin in which Robin has spent the last few decades. His fabric cape and translucent plastic belt are also original. 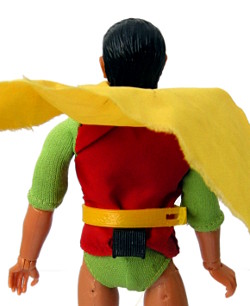 As we’ve seen with other Robins, most notably the Kenner Super Powers version, toy manufacturers have always like to show off the Boy Wonder’s sporting prowess and have given him long athletic legs and a pair of teeny tiny shorts to better show them off! The skimpiness of this costume and the short sleeves on his tunic do also afford us a good look at Robin’s joints – we can clearly see that this is a type 2 figure with plastic ball joints. Like Batman, this action figure would also have been distributed by UK company Palitoy in 1976, although the label inside his costume mentions only Mego. The button that drives the fighting mechanism on the back of the figure is black – and still works! – rather than flesh coloured, as was the case with US figures. 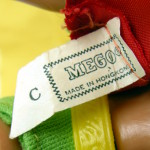 By the time the Fist Fighters came on the scene Mego’s Robin was being produced with his mask securely painted on to his head – the hard-to-find “Removable Mask Robin” evidently lost his disguise too often and too quickly and the switch was made.

I hope you’ve enjoyed the stories behind these Mego loft finds as much as I’ve enjoyed sharing them!

Coming soon – Countdown to Halloween and some monster figures!