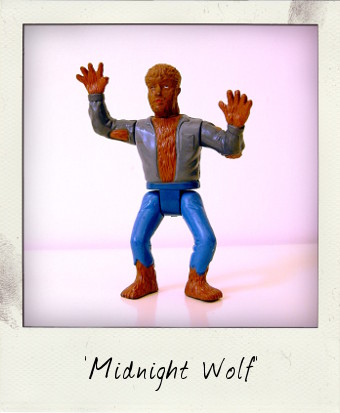 Midnight Wolf? Surely, that’s the Wolf Man as played by the great Lon Chaney Jr. in the 1941 Universal horror film of the same name?! Apparently not, folks, although I’ll admit that this 4 ½ inch action figure had me flummoxed for ages! I’m a huge fan of the Universal Monsters so when I saw him going for a song on an Internet auction site I couldn’t resist buying him, but once he had arrived and I’d peeled off the bubble wrap I could find no copyright information, COO or date of manufacture stamped anywhere on the figure. After trawling through dozens of websites I eventually lucked out and found the Universal Monster Army website and a post on the forum there quickly helped me discover the background of this figure.

Back in the late 1960s Marx issued a set of six licensed Universal Monsters solid figurines molded in blue and orange plastic, which included the Wolf Man. This figure looks almost identical to that Marx figure – particularly in the position of the raised arms – and may well have been copied from that mold, with some simple articulation built into the shoulders, legs and head (which is soft and rubbery and will actually pop out of the body). This would lead one to think that this is merely a bootleg action figure, but surprisingly, it was actually produced by Simba, one of Germany’s largest toy manufacturers, although many Simba toys today are manufactured in China.

Issued as part of the Monster – Vampire line in 1999, the series included some shameless knock-offs inspired – ahem – by the Universal Monster movies: “Bloody Mummy” (The Mummy) , “Green Frankie” (Frankenstein), “Killing Beast” (Hunchback of Notre Dame), “King of Vampires” (Dracula), our “Midnight Wolf” here, as well as a chap called “Sharp Hand Joe” (Freddy Kreuger). Bootleg or otherwise, however, the figure is such a good movie likeness that this is still a welcome addition to my vintage movie monster action figure collection!

More supernatural surprises in our next post as we count down to Halloween!