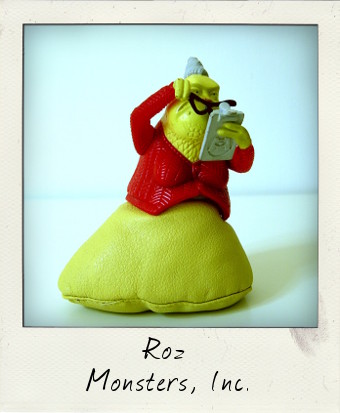 This summer sees the return to the big screen of some of the characters from the hugely popular 2001 Pixar animated movie Monsters, Inc. in a 3D prequel Monsters University. Monsters, Inc. received the 3D treatment itself last year and that version will finally be hitting screens in Italy where I live next month, so I thought it might be fun to take a look at a collectible figure from the time of the first film’s original release – the gravel voiced Monsters, Inc. secretary, and undercover boss of the Child Detective Agency, Roz.

When Steve Jobs died in 2011 he was almost exclusively eulogised for his innovations in technology, but PETA – People for the Ethical Treatment of Animals – remembered Jobs as a very public vegetarian who had played a significant a role in ending Disney and Pixar’s commercialisation of its movies through Happy Meal toys and gimmicks sold at fast food giant McDonald’s. When Monsters, Inc. was released, however, Pixar and Disney were still super-sizing kids all over the world, aided and abetted by toys like this 4 ½ inch Roz, which I believe is a European only release, dated 2002 in line with the movie’s release this side of the Atlantic.

I haven’t eaten meat for a couple of decades so never visit McDonald’s Restaurants, but I confess I’m a sucker for the Happy Meal action figures when I find them in a bargain bin or on a thrift stall. And this Roz figure was irresistible! Her bottom half is actually a mini bean bag – perfect for the squidgy, slug-like Roz – whilst her top half is molded in hard plastic, with an impressive amount of detailing on the knit of her cardigan and her scaly skin. She even has several points of articulation – the waist will swivel a full 360°, and both her arms move so you can lower or raise her glasses to her beady eyes as she looks at her clipboard.

The entire set of figures included Sully, Mike, Boo in her monster costume, Mr Waternoose, Celia, Boggs, and a Child Detection Agent. Collect them all…you KNOW you want to!