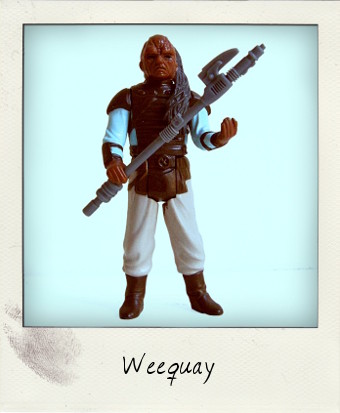 One of the most well-loved of the minor characters in Herman Melville’s Moby-Dick is surely that of the cannibal Queequeg, the archetypal “noble savage”, and dab hand with a harpoon. It’s no surprise, therefore, that during pre-production of Return of the Jedi the crew nicknamed this Weequay skiff guard “Queequeg”. After all, he brandishes a harpoon-like pike weapon, swaggers up the deck of a Desert Skiff like a pirate on a sloop upon the high seas, and even forces Luke Skywalker to walk the plank during the Sarlacc Pit Battle scene!

Unlike many of Kenner’s 3 ¾ inch Star Wars action figures, this minor character actually gets enough screen time to make him memorable. In fact, Luke dramatically jumps right over him, in a nifty diving board flip, when he reaches the end of the plank, thus saving himself from a nasty plunge into the Great Pit of Carkoon. We never seen Queequeg’s on-screen defeat – one minute he’s there, the next he’s gone – although kids back in the day could act that out for themselves with this Kenner figure! 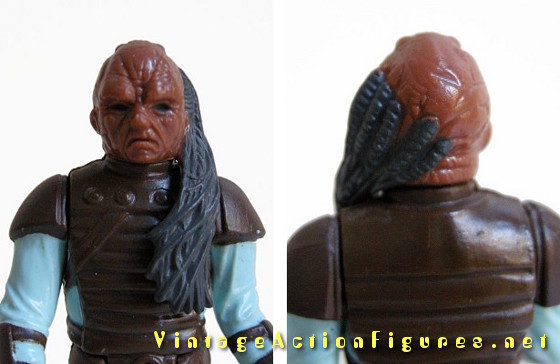 In 1983 when Kenner first released him on a Return Of The Jedi 65 back card, he was still known by the generic species name of “Weequay”. Whatever you prefer to call him, however, he is still a fine example of the attention to detail lavished on even minor players in this action figure line. His wrinkled, leathery face and bald head, and matted dreadlocks / plaits (molded in softer, bendy plastic), are beautifully detailed, as are the folds and straps on his costume. My Weequay is in great condition with zero paint wear, stiff limbs, and is complete with his original weapon. The country of origin is stamped very faintly as “H.K.” (Hong Kong) running downwards on the back of his right leg, whilst the copyright information and date – © LFL83 – runs downwards on one line on the back of the left thigh.

His pose is also unusual amongst the Star Wars figures in as much as he is actually positioned with a slightly bent left arm (to better balance the Skiff Guard Vibro Axe accessory presumably), and his knees give the impression of being ever-so slightly bent, as if poised to spring into action. The overall effect is that this vintage, admittedly limited figure with only five points of articulation, appears dynamic. He’s a fantastic vintage Star Wars action figure find to add to your collection!