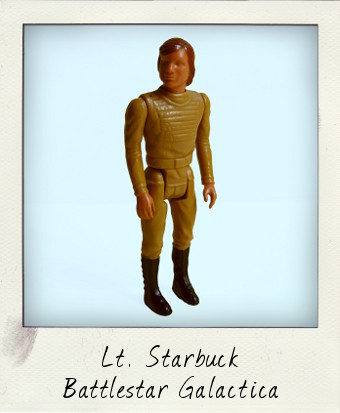 Light years before the name “Starbuck” added an “s” and became synonymous with caffè latte, the world’s most famous Starbuck was the fictional first mate of the Pequod, the whaling ship at the heart of Herman Melville’s novel Moby-Dick. In fact, it was in homage to this literary character, that our Lieutenant Starbuck here, the protagonist of the cult 1978 sci-fi television show Battlestar Galactica, was named, although the gambling, womanising, and cigar smoking Viper starfighter pilot, and the Quaker first mate on the Pequod, could not have been more different! 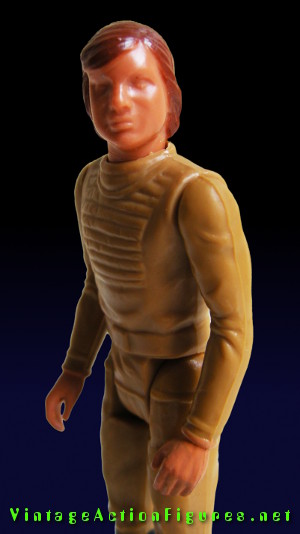 If producer Glen A. Larson hoped to ride the wave of sci-fi success that Star Wars was enjoying in cinemas with his TV show, then certainly Mattel must have taken a long, envious look at toy making rivals Kenner, and in particular their hugely successful 3 ¾ inch Star Wars action figures, when they obtained the license for their own spin-off toys for Battlestar Galactica. Sadly, the show was cancelled after only one season, whilst this line of 3 ¾ inch figures managed to run to two series, with the second series figures considerably rarer than the first. Mattel never even got the chance to make a Captain Apollo figure! Which is a great pity, because the facial sculpts of the human characters are exceptionally good, and both Commander Adama and Lt. Starbuck really look like actors Lorne Greene and Dirk Benedict. My only gripe is that Mattel cut corners and chose not to paint any details on the faces, so with no eyes or eyebrows, they have a fuzzy, perennially soft focus look about them.

The figure has the standard 5 points of articulation at the neck, shoulders, and hips. The molding on the body is okay, with some nice details on the torso and boots, although again, scrimping on costs, Adama and Starbuck have the same body sculpt – just cast in different colours. With such a small line it’s hard for this kind of cost cutting to pass unnoticed. The additional fabric cloak accessory and blaster – sadly missing on my figure – were nice touches, however. The copyright information is marked on the lower back of this figure as © 1978 Univ Studios on two lines, with the COO Hong Kong on a third line below.

Minor grievances aside, these figures remain must-have items for any fans of the classic Battlestar Galactica show. Track down Daggit, the Imperious Leader, Ovion, and the Cylon Centurian from the first wave, and Baltar, Boray, Lucifer, and the Cylon Commander, from the second.