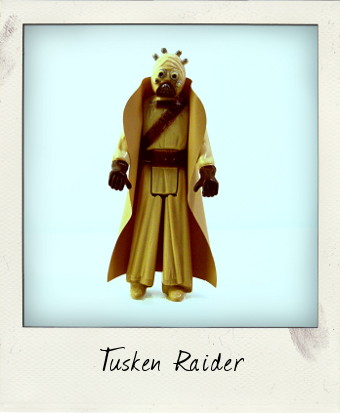 George Lucas just can’t stop meddling with those Star Wars movies! Star Wars: Episode One – The Phantom Menace will be hitting cinema screens all over the world AGAIN this weekend – only this time in 3D. The 2D version was already bad enough, so I think I’ll pass on that one…Instead, let’s take a look back at a vintage Kenner Sand People action figure from the original trilogy, indeed from the very first Star Wars movie, which is nowadays known as the rather less catchy Star Wars Episode IV: A New Hope.

The Sand People (or Tusken Raiders as they were later called on Return of the Jedi toy packaging), were those pesky warriors that appear out of nowhere on the planet Tatooine and attack Luke, who is then rescued by Obi-Wan Kenobi. All bandaged face and limbs, with mysterious spikes and tubes coming out of their skulls, cheeks and eyes, the Sand People looked very much like a Steampunk version of Karloff’s Mummy and Kenner, as always, did a wonderful job in creating a simplified, yet movie-accurate figure in only 3 ¾ inches.

As is often the case, there are all sort of variations for the hard core collector to track down from differing shades of brown on the belt and gloves, to the highly sought after “hollow cheeks” version, where the cheek tubes are literally hollowed out, rather than the solid blips in my version. He was originally issued with his own brown Gaderffii Stick weapon, which my figure is sadly missing, although his tan vinyl cape is still in great condition. The copyright information – © G.M.F.G.I.1977 – and country of origin – Hong Kong – is very faint and runs downwards on two lines on the back of the left leg.