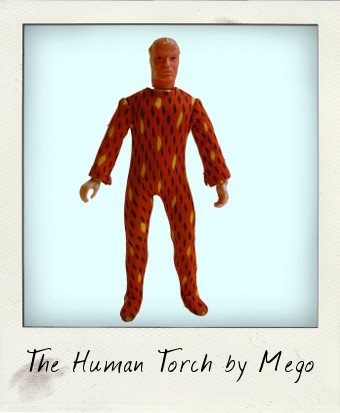 Collecting vintage 8 inch Mego action figures from the World’s Greatest Super Heroes line can sometimes bring some fun surprises as we saw a while back with my Superman figure with Spider-man’s red torso. Whilst many anomalies may well have left the factory that way during the long production life of these hugely popular figures, some toys have clearly been pieced together Frankenstein-style with spare parts from assorted characters or even reproduction accessories.

I’m not entirely certain what the history behind this latest Mego find might be, but it’s an absolute classic mashup – a Human Torch head on a Fist Fighting Robin body! 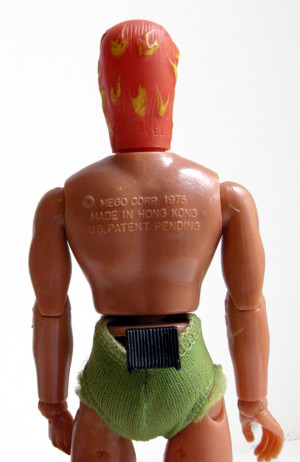 At first glance he looks 100% Human Torch – the costume is in great condition, with only the slightest fraying at the sleeves, and his head has suffered only a little paint wear and none of the vinyl migration that this figure, like his fellow Fantastic Four members, sometimes suffers from. Turn him around, however, and you’ll notice that he has a black sliding button which drives a fighting mechanism in his arms. Even further investigation reveals that he is sporting a bright green pair of underpants under his flamy jumpsuit! Holy Body Snatchers Batman! The type 2 figure with plastic ball joints and the black button confirm that this must be a UK distributed Robin Fist Fighter figure by Palitoy. The original Human Torch figure was, instead, issued with an all red body. 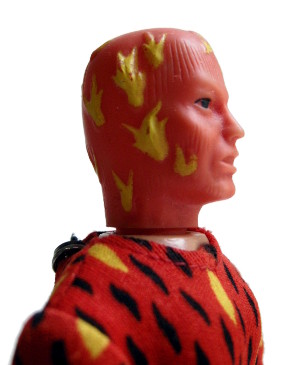 The copyright information is dated Mego 1975, but both the UK Fist Fighters and the Human Torch were distributed the following year so it’s impossible to date when this head switch actually happened. Issued as part of the final wave of WGSH figures, Mego did Marvel Comics’ Johnny Storm proud – it would surely have been easier to have issued him wearing his blue Fantastic Four suit alongside Mister Fantastic and the Invisible Woman, but instead Mego faced up to the challenge of creating a man on fire. His flame patterned suit may look a little cheesy compared to recent more sophisticated renditions of this figure, but he has a real charm that I love! Alongside the Thing, he’s a must have for any Mego action figure collection!