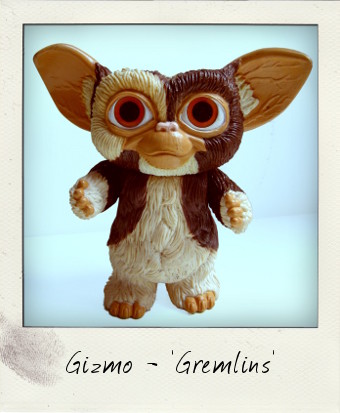 The 1980s were a wonderful time for the comedy horror movie, and two of my absolute favourites from that decade were released on the very same day on June 8, 1984 – Ivan Reitman’s Ghostbusters and Joe Dante’s Gremlins. Those pre-CGI times were something of a heyday for animatronics and puppetry workshops, and the marionettes created for Gremlins still look impressive to this day.

Gizmo the Mogwai here, may have looked cute and cuddly, but if three golden rules – never expose it to bright light; never get it wet; and never, ever feed it after midnight – were broken, it would spawn a brood of downright evil offspring capable of wreaking havoc! 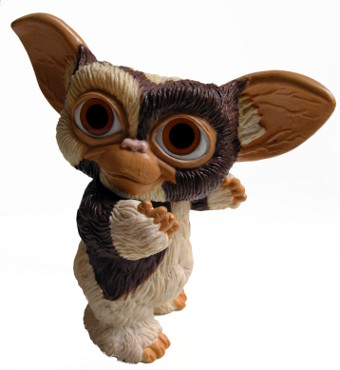 Never feed him after midnight!

In spite of its rushed summer theatre release, Gremlins was really a Christmas movie – and a very dark one at that, with violent scenes which earned it one of the earliest ever PG-13 ratings – so come the holidays that year, Gremlins action figures by LJN toys were flying off the shelves. As a huge fan of the movie, I couldn’t resist grabbing my very own vintage Gizmo when I saw it in an online store recently. NECA recently released an impressive series of new Mogwai figures including Stripe, but I was keen to track down a vintage original too.

When I opened the parcel I was totally surprised by how large this figure is – at 7 inches tall and almost 7 inches wide measuring from the tips of his ears, he’s impressively close to the movie-scale creatures and displays beautifully. Okay, so the points of articulation are pretty limited – he/she/it swivels at the neck and shoulders only – but who cares, when the sculpt is so impressive. The detailing on the furry body and veined ears is excellent, and whilst the smaller 3 ¾ inch version of the figure had painted eyes, this larger Gizmo has plastic shiny button eyes – a nice touch that give extra expression to the face.