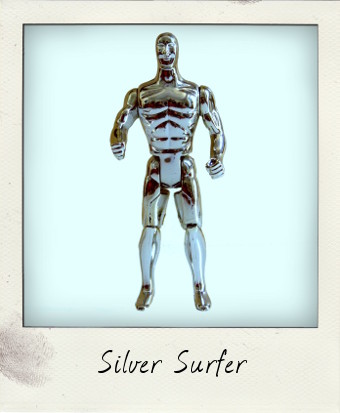 Long before the name “Silver Surfer” was adopted as the Web’s favourite nickname for elderly Internauts, this alien superhero graced the pages of Marvel Comics, first appearing in the Fantastic Four issue #48 in March 1966. Of course, the Silver Surfer never actually required anything as ordinary as waves in the ocean to surf, when with his cosmically powered flying surfboard-like spacecraft he could surf the universe faster than the speed of light!

Before taking a brief blogging break in August I wanted to leave you with a vintage action figure with a summery feel, so who better than the Surfer here as he appeared in this Toy Biz edition from 1992? Whilst surfing may not yet be an Olympic discipline, with the recent inclusion of snowboarding in the Winter Games maybe we’ll see surfing in the Summer Games one of these quadrennials!

An uncomplicated, what-you-see-is-what-you-get figure measuring 5 inches in height, the first Toy Biz version of the Silver Surfer appeared in their Marvel Super Heroes Series I in 1990 with a friction powered “action surfboard” accessory, and was built with only seven simple points of articulation at the neck, shoulders, hips and knees only. Two years later, this second figure appeared in series III, identical in sculpt but with a bright new paint job – instead of the previous dull grey colour he now sported a silver vacuum metal finish, described as an “ultra-reflective galactive glaze” on the back of the packaging.

Sadly my loose Silver Surfer has lost his board so I thought I’d have a little fun with him and have added a traditional surfboard of my own to the photo below! (With apologies to Silver Surfer devotees…!) 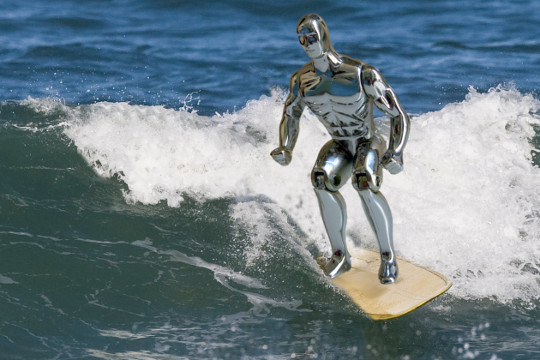