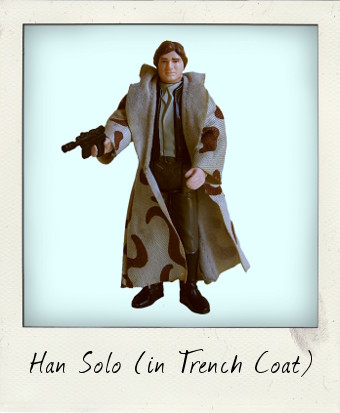 When Kenner launched their first Han Solo 3 ¾ inch action figure way back in 1977 they made one of the very few errors in the company’s history, creating a likeness of Harrison Ford with a disproportionately small head. Eager to correct their mistake, the ensuing re-sculpt saw them err on the generous size with the new Han sporting a oddly large bonce. This, of course, is all grist to the mill for collectors who just love tracking down varieties.

Alongside the legendary small and big-headed Han Solo action figures, Kenner released several versions of our swashbuckling Star Wars hero over the years. This version in a camouflage trench coat as he appeared on the planet Endor in Return of the Jedi, the final movie in the original trilogy, is another opportunity for collectors to chase down the different variations. 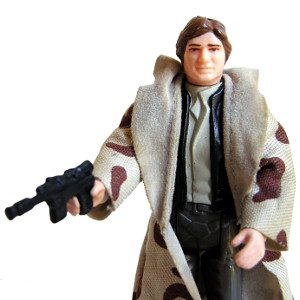 Once again, Kenner just couldn’t resist working some more on the head sculpt, releasing the Han Solo (In Trench Coat) in two distinct versions – the first sculpt is more of a soft-focus Han, which gives him a chubbier, kinder face. The second sculpt, which we see here, is sharper with a more rugged expression, albeit with a very pink shade of flesh tone on the face and lighter hair colour.

The body too on this version uses a hard edged sculpt – the details are smoothed out under what looks like a denser layer of paint on the alternative mold. Even though the figure was intended to be covered by an outer coat, the attention to detail is excellent on this figure with pockets, belts and holster all picked out in a carefully detailed mold.

Even the hand sewn trench coat has its variations with either blank or printed lapels versions available, the result, it is presumed, of random inconsistencies in manufacture as these blank lapels are actually made from the same camouflage cloth from which the coat is cut, merely reversed to show the velvety back of the fabric. I was delighted to find this loose figure still wearing his original trench coat in excellent condition. The coat is surprisingly easy to remove and put back on again, but as it is the accessory which defines this figure it would seem that most kids opted to keep their Han Solo with his trench coat on.

This particular figure carries no country of origin (COO) with only Lucas Films Ltd. and the date indicated by “© L.F.L. 1984” running downwards on the back of the left thigh. The Black Rebel Blaster is a reproduction spare part to complete this figure for display purposes.