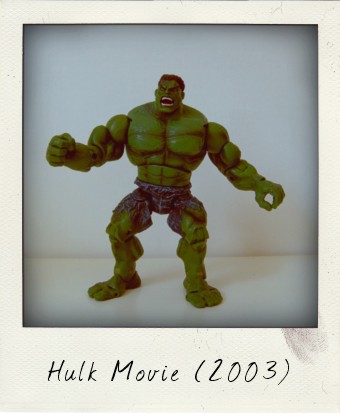 When the Incredible Hulk appeared on the big screen in 2003 in Ang Lee‘s hotly anticipated Hulk, critics and public alike just didn’t seem to get the movie and it met with a tepid reception. For me, it is one of those much maligned films that I’m certain (and I hope) will one day regain its rightful place as classic superhero movie. I LOVED it!

As with every major movie release, it was accompanied by all the usual hype and marketing  gimmicks, including some wonderfully sculpted action figures by Toy Biz (as Marvel Toys, the toy division of Marvel Entertainment, was known in those days). This 6 1/2 inch  ‘Super Poseable Hulk with Catapult Launching Action’ was released in September 2003 as part of Series Four, which also included a ‘Smash & Scream Hulk’ and a ‘Rampaging Hulk’. This Hulk has numerous points of articulation, including wrists, fingers, ankles and toes and stands solidly unassisted in any pose you care to put him in! Each Hulk came with an accessory such as a wall to smash or, in this case, a catapult, to send him flying. Luckily, although this Hulk has lost his original catapult, he is in great shape and clearly wasn’t hurled across too many children’s bedrooms!