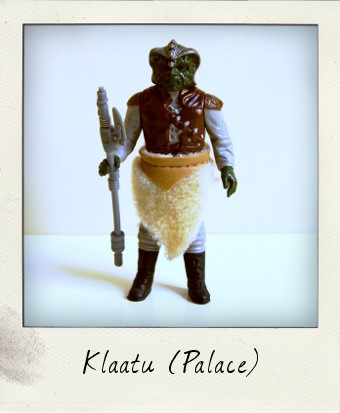 I seem to have added quite a few aliens from the original Star Wars trilogy to my vintage action figure collection this year, particularly henchmen of Jabba the Hutt seen fleetingly in the palace scene and the various guards riding the desert skiffs in the Sarlacc Pit Battle scene in Return of the Jedi. Whilst these figures may have enjoyed only split seconds of screen time, they were still important players in the imaginary Star Wars universe created by kids back in the day. Bewilderingly, they’ve since acquired gloriously complicated personal histories and new names in the Star Wars Expanded Universe. This fella “Klaatu” was originally one of a trio of characters named after the famous phrase “Klaatu barada nikto” from the cult science fiction film The Day the Earth Stood Still – “Nikto” and “Barada” also appeared in Return of the Jedi – but nowadays he is known by the far less dignified name of “Wooof”. Wooof?! Seriously? Most likely, as with the skiff guard Weequay aka Queequeg, Wooof was an on-set production nickname for Klaatu. 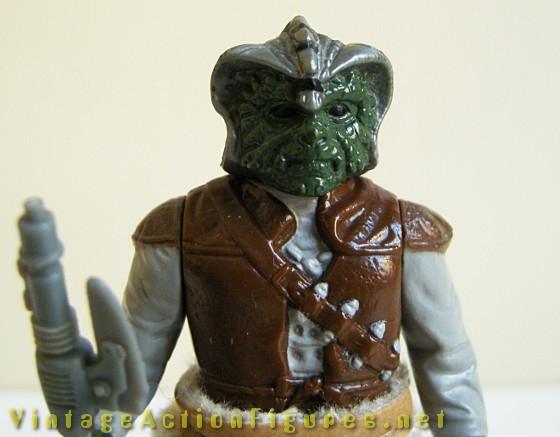 Klaatu – Who you looking at? 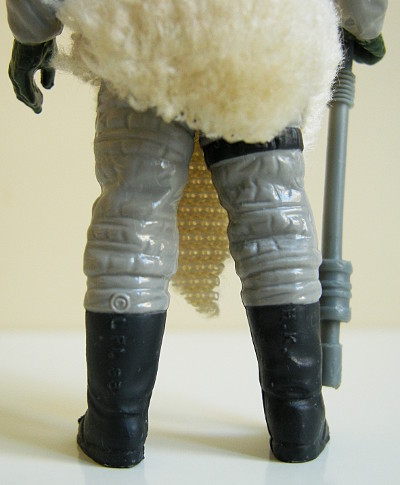 The fact remains, however, that whatever name you choose to give him, this 1983 figure is one of the coolest of Kenner’s 3 ¾ inch Star Wars alien action figures. And if you’re into collection Star Wars variations, you’ll have a field day with this one, as he was issued with several major differences in sculpt and paint. My Klaatu has four grey limbs, but as limbs were also produced in tan, variations exist with not only four tan limbs, but with a variety of colours on a single figure! Harder to identify is whether the head on my figure is cast in green plastic with his helmet painted in silver, or cast in silver plastic with the face sprayed green. Having inspected it closely I’m pretty certain it’s the latter. Finally, the boots and thigh belt on Klaatu are found in black or grey. My figure is sporting slate grey boots. Does he remind anybody else of Madame Vastra from Doctor Who?

Am delighted that my figure is still wearing his furry Klaatu Skirt and has his Skiff Guard Vibro Axe weapon accessory (the skirt is actually firmly attached and would require scissors and real determination to remove). He’s is in excellent condition with zero paint wear, and stiff limbs. The country of origin is stamped as “H.K.” (Hong Kong) running downwards on the back of his right boot, whilst the copyright information and date – © LFL 83 – runs downwards on one line on the back of the left calf, starting just above the boot.

A must-have vintage Star Wars figure for any collection!