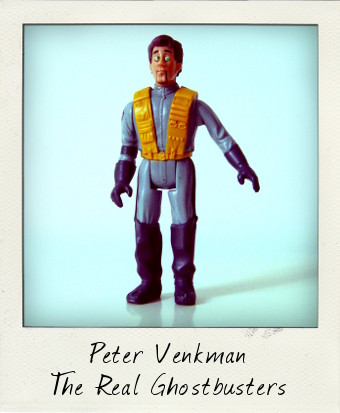 The countdown to Halloween continues! I simply couldn’t let October go by without including one of the Real Ghostbusters team and another action figure from one of my favourite Kenner lines from the late 1980s.

This 5-inch Peter Venkman action figure is from what was probably the most successful and popular sub-series from their Real Ghostbusters toy line – Fright Features. Far simpler than the Super Fright Features that followed, these figures were their first foray into innovative interactive expressions – each figure in the series is featured with one arm held slightly wide from their body and, if squeezed, the facial expression changes into one of alarm. Our Doctor Venkman here, for example, has clearly had a hair raising encounter with a ghost, his eyes pop out of their sockets and his jaw drops. 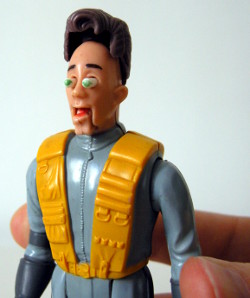 Amazingly, this Venkman’s arm is still intact and is in full working order. Whilst it’s pretty easy to find these action figures at flea markets, they have often suffered amputations and are minus those all important Fright Feature controlling arms! As is often the case, however, his hook shot weapon (proton packs weren’t issued with these figures) and the Gruesome Twosome Ghost with which he was originally packaged, have been sucked into another dimension (or were eaten by a family pet).

This Peter Venkman is, of course, based on the animated Real Ghostbusters TV series in which the character was voiced first by the late Lorenzo Music and then by Dave Coulier. Bill Murray’s movie version in the Ghostbusters big screen live action movie was selected by the magazine Empire as one of The 100 Greatest Movie Characters of All Time. Internet rumours, however, abound about how Murray has made life difficult for toy manufacturers wanting to create action figures based on Murray’s likeness and copyright issues seem to surface – NECA’s attempts some years ago to create a Ghostbusters line were nipped in the bud. Mattel’s recent Murray Venkman figures have been pretty good, however, albeit in a soft focus kind of way!