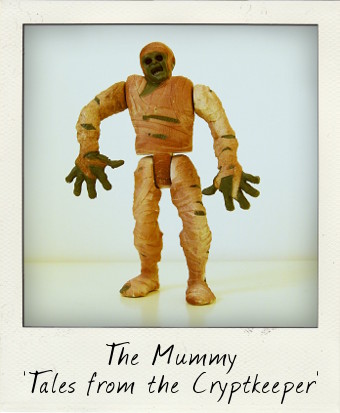 With Halloween fast approaching this seems the perfect time to dig up – terrible pun! – this Mummy action figure from the animated cartoon series Tales from the Cryptkeeper. Running for two seasons from 1993-1994, the Mummy character appeared in episode 11 from the first season – This Wraps It Up – which first aired on December 4, 1993. Created in 1994 by one hit wonder toy manufacturers Ace Novelty, who appear to have only ever produced the Cryptkeeper series, this 4 ¾ inch figure is pretty cool if you are into monster action figures. With a sculpt that looks part-Zombie and is vaguely reminiscent of Karloff’s classic Universal Monsters Mummy, not to mention some good attention to detail in his pink and grey, mouldy bandages, this is an action figure that fits extremely well into any horror action figure collection. 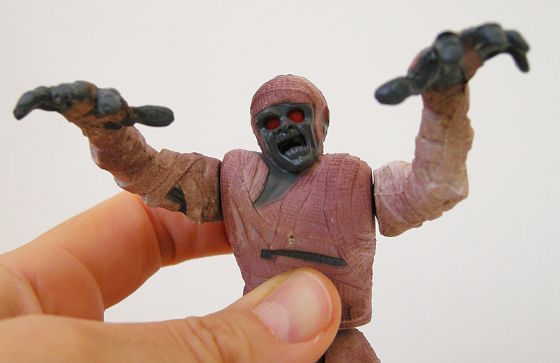 The Mummy from ‘Tales from the Cryptkeeper’ with his red eyes and arms raised!

The packaging did put a serious spin on this figure’s capabilities, however, that may have disappointed 1990s kids once they had ripped open the blister and got their hands on the action figure itself. Two “Special action features” were promised:

which in practice translated into the fact that if you moved a switch on his back his arms would rise up and his eyes would roll back in his head and thus turn from black to red. As a forty-something adult collector, I’m easily pleased, however, and thought this was a fun interactive element when I picked up this vintage figure recently!

There were some other exciting character specs on the back of the card detailing that the Mummy is 5 foot 11 inches in height, weighs 160 lbs and is recognisable by his “glowing eyes and the scent of ancient tombs”.

Encased within his gold plated sarcophagus, the Mummy slumbers deep beneath the smothering blanket of the Egyptian sands. When disturbed, he rises, dripping with withered wrappings, to seek vengeance on greedy archaeologists.

Wouldn’t you just love to have heard Vincent Price rap that?!