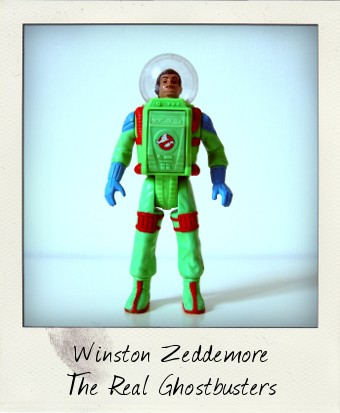 Of all The Real Ghostbusters action figures in the Super Fright Features toy series, in which the heroes of the long-running TV animated show sport wacky space suits and looks of terror, Winston Zeddemore – played by Ernie Hudson in the movie and voiced by Arsenio Hall in the cartoon – is probably the most imaginative of the lot!

There’s a lever on the action figure’s back which makes his head disappear – only to reappear when a flap then opens in his chest, to reveal a giant screaming Winston head, complete with tongue hanging out! Whilst this 5 inch action figure by Kenner is described as having 5 points of articulation the extra “fright feature” more than makes up for any other limits in movement. 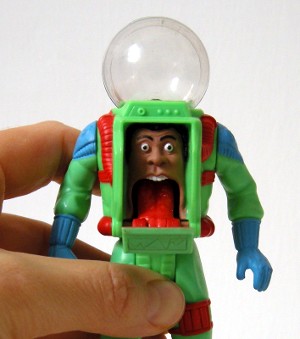 Issued in 1989, the Super Fright Features were a sequel to the enormously popular Fright Features action figures of the previous year. Such popular interactive figures are easy to come by, but more often than not, they have been played  to death with. This Winston, however, is in really great shape with hardly any paint wear at all, the Ghostbusters logo transfer is still intact and although he has mislaid his accessories – an orange unnamed weapon and the Meanie Weenie Ghost – his screaming head still works perfectly. A great vintage action figure!