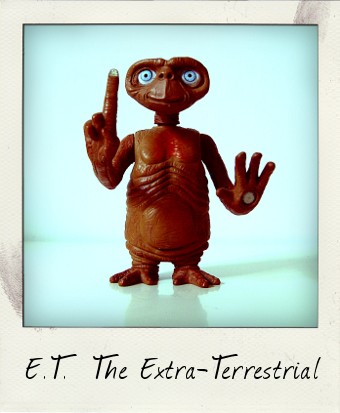 This was a recent market stall find – quite literally, at the bottom of a box of mostly broken toys. Amazingly, this 5 inch Interactive E.T. The Extra-Terrestrial action figure was still in working condition, with plenty of life left in what are probably the original batteries! I discovered there and then that pressing down on E.T.’s head would elicit one of the classic lines spoken by the alien creature in Spielberg’s movie – “Home” – but it wasn’t until much later that I discovered, quite by accident, that his heart light glows red and his index finger lights-up to the words “Be Good!” if you pull back his left arm!

Manufactured by Pacific Playthings in 2001, the figure was sold exclusively at Toys “R” Us. Universal Studios and Amblin Entertainment teamed up with the toy store chain in November 2001 as part of a worldwide merchandising campaign that gave them exclusive rights to produce a huge range of E.T. inspired products, ahead of the 20th anniversary of E.T. The Extra-Terrestrial, which was originally released in 1982.

Unfortunately, I haven’t been able to test one of the most curious aspects of this action figure. Apparently, if he is paired up with another action figure from the same series – such as Elliott, for example – he will interact with the other figure, speaking if other figure’s hand is placed on his forehead. In fact, his own left hand is embedded with a flat metal disc, which is presumably where the electronic chip that controls these functions lives. Meanwhile, I’ll keep my eyes peeled for another action figure in the series!