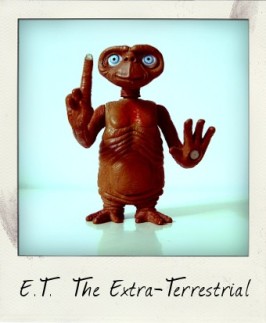 This was a recent market stall find - quite literally, at the bottom of a box of mostly broken toys. Amazingly, this 5 inch Interactive E.T. The Extra-Terrestrial action figure was still in working condition, with plenty of life left in what are probably the original batteries! I discovered there and then that pressing down on E.T.'s head would elicit one of the classic lines spoken by the alien creature in Spielberg's movie - "Home" - but it wasn't until much later that I discovered, quite by … END_OF_DOCUMENT_TOKEN_TO_BE_REPLACED