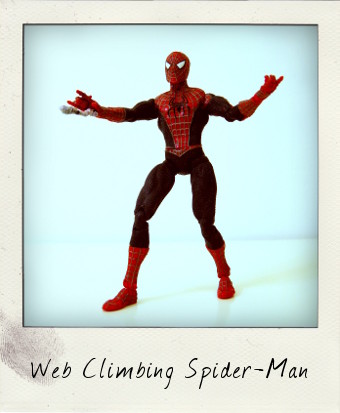 One of the action figure previews to generate a major buzz and lengthy blog posts all over the Internet during the recent San Diego Comic-Con was the all new Hasbro Spider-Man with sparkly metallic finishes. It will be released to coincide with the 2012 reboot of the Spider-Man movie franchise – The Amazing Spider-Man – which sees the very talented Andrew Garfield with the unenviable task of taking over a role that Tobey Maguire played so nerdily well in the Sam Raimi trilogy. In my book, however, there’s simply no such thing as too many Spider-Man movies, or action figures for that matter, so until the Garfield figure hits store shelves, here’s a look at some official movie merchandise by Toy Biz from the 2004 Spider-Man 2 movie  – the Web Climbing Spider-Man.

Like so many of the vintage figures that I collect, this 6-inch action figure was lurking at the bottom of a thrift stall bargain bin and is therefore missing one of his accessories – his bendy web traps – a length of flexible plastic, painted silver, and designed to wrap around villains. No matter, the other accessory is actually built into the figure – a retractable web-line with a hook at the end, which can be extended from his right arm and fastened onto an object and released, allowing him to “climb” up doors and bookshelves…sort of! 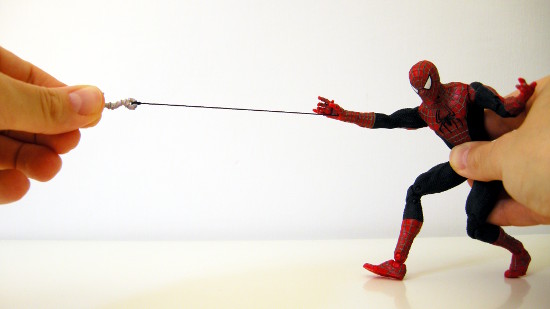 The only drawback here, of course, is that the right arm can’t bend at the elbow to house the mechanism (although the fingers on his right hand DO move). As if to make up for this, the rest of the figure has an impressive amount of articulation with both cut and ball joints galore – he swivels not only at the key points of neck, shoulders, elbows, wrists, hips, knees and ankles, but can also wiggle those toes and fingers, whilst the cut joints at the waist and in the forearms and shins allow for some improbable 360° turns!

Needless to say, this figure is an absolute dream to pose and display and one of those figures you can’t stop readjusting to see how he looks is this or that position. I love him to bits!