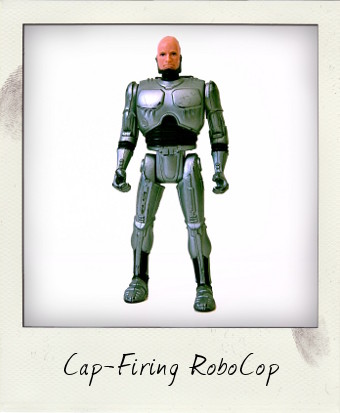 When an uber-violent hit movie garners an adult-only viewers certificate as well as its cult following, it would be reasonable to assume that toy makers looking to score with a tie-in action figure or toy line targeted at kids would be facing a problem – R-rated action figures?! When RoboCop hit the big screen in 1987 and went on to become both a critical and commercial success it was nevertheless accompanied by a successful merchandising campaign aimed at kids way too young to have seen the movie!

The Robocop and the Ultra Police product line first hit stores in 1988 and who better than Kenner to recreate everybody’s favourite cyborg cop in a mere 5 inches?! With his vac-metal paint finish and great detailing on the sculpt, this was an awesome looking RoboCop and the likeness to actor Peter Weller on removing his helmet – alas lost, along with his gun, on my figure – is really very good. RoboCop fanatics will notice that they messed up slightly – his forearms and groin area should really have been black, but I am prepared to overlook this detail as the rest is just so good.

The only major frustration with this figure is that the standard 5 points of articulation at the head, shoulders and hips begin to feel extremely limited – given that the joints are sculpted so well one really wants to be able to pose him at the knees and elbows too! Kenner were clearly concentrating the moving parts in one major area with this action figure – the “Rapid repeat” cap roll firing system. Turn RoboCop around and you’ll see that he has a compartment which can be opened – feed a roll of caps from a cap-gun in the back, snap the lid closed and fire away using the metal trigger protruding from his back!

As with all self-respecting toy lines, RoboCop was issued with a range of vehicles and accessories such as a Robo-copter and Robo-cycle, as well as a mean set of foes known as the Vandals.