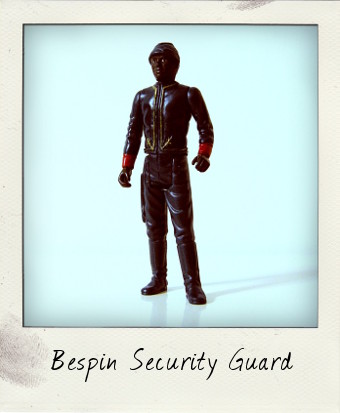 By the time that this classic 3 ¾-inch Star Wars action figure variation came out – first on a tie-in card for The Empire Strikes Back and then repackaged for The Return of the Jedi – it was already clear that toy manufacturers Kenner were happily set on helping kids re-enact all three movies using the entire cast, down to the smallest walk-on role! I actually watched The Empire Strikes Back again a few weeks ago on DVD and must have blinked at the wrong moment, because I could barely remember the appearance of this Bespin Security Guard – in either his moustachioed Caucasian variant, or this, his African-American version. 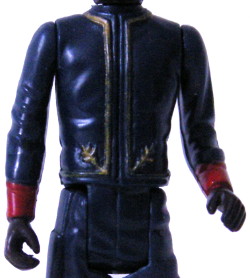 Wookieepedia, the Star Wars Wiki, however, reliably reminded me that not only was he in the movie, but that he even has a name – Sergeant Edian, played by actor Quentin Pierre, whom Star Wars fact fans will also want to know acted as a stand-in for Billy Dee Williams aka Lando Calrissian in The Return of the Jedi. (Real Star Wars fact fans probably already know that, of course, so skip this bit if I’m boring you already…). His most memorable moment in The Empire Strikes Back – for anybody still reading this post – is certainly when he escorts the carbon-frozen form of Han Solo to Boba Fett’s ship.

Originally issued with his own Cloud City pistol, my figure is sadly accessory free. The country of origin – “Made in Hong Kong” – is written in full and runs downwards on the back of his left thigh, with Lucas Films Ltd. and the date are abbreviated to “© LFL 1981” running downwards on the right.

Personally, I really like this figure – something about the stance, with his left leg slightly forward, gives him a nice sense of movement and allows him to display really well, whilst the gold trim and dark red cuffs on his tunic makes this a fine example of Kenner’s attention to detail in the paint work of even minor players. He looks so stylish and is a must-have in any Star Wars collection!